In this post, we’ll return to the Kaggle data containing information on Pitchfork music reviews. In a previous post, I used this dataset to cluster music genres. In the current post, I will use R and the tidytext package (and philosophy) to examine the text of the music reviews. Specifically, the goal of the analysis described in this post will be to track the course of positive and negative sentiment use across the length of the review texts.

The data are available on the Kaggle website. I did an extensive data munging exercise to clean and prepare the data for analysis. As noted in the previous post using these data, some of the music reviews are assigned multiple genres. As we will later be interested in examining sentiment use in the different genres, I excluded reviews with more than 1 genre from the scope of this analysis, leaving us with 12,147 review texts. In this post we will focus on 3 columns in our dataset: one column containing a unique review identifier, one column with the review text, and one column that contains the genre of the album being reviewed (with the following options: electronic, experimental, folk/country, global, jazz, metal, pop/rnb, rap and rock).

In order to prepare our data for analysis, we must turn it into a tidy dataset. The basic idea behind the tidytext framework is that we represent our data with 1 line per token (a sub-division of a longer text, typically but not always a single word), keeping track of important meta-data (e.g. the id number of the review the word appears in) in additional columns.

I was first introduced to this way of thinking about text analysis at Julia Silge’s excellent talk at the useR conference in Brussels last June. I have done lots of text analysis (with R and Python), and I have always used the “bag of words” framework, in which each text is kept in a single line of the dataset. This traditional approach is very handy when doing, for example, predictive analysis with text. However, the tidytext philosophy lets us think about and analyze our data in a slightly different way. Check out the excellent tidytext book, available freely online, for a thorough overview of the approach and its implementation in R.

One of the advantages of the tidytext approach is that it retains information about word order that is lost when using the bag of words approach. A nice illustration of using word order in quantitative text analysis is described in the tidytext book and vignette. This analysis examines the balance of emotion words across the course of each of Jane Austen’s novels. I was inspired by this approach, and the current post is an adaptation of this idea, applied to Pitchfork music reviews.

The head of our raw dataset (called text_df), which serves as the input for our analysis, looks like this:

We will first turn our raw data into a tidy text dataframe (as explained in the tidytext vignette):

Our data have now been transformed into a tidy format (only first 10 rows shown):

As shown above, our data now contains one word per line, and our meta-data (review id and genre) are contained in two additional columns. Note that, by default, the unnest_tokens function removes punctuation and converts all letters to lower case.

Unnesting our text data gives us a narrow but extremely long dataframe. Specifically, our dataframe contains as many rows as there are words in the 12,147 reviews: 8,182,882 to be precise!

As we are interested in understanding the course of emotional valence throughout the texts, we will add a column indicating the order of the words within each review, which I will call “position_in_review_0.”

Our dataset, called tidy_reviews, now looks like this (only first 10 rows shown):

We can see that the data contain stopwords (words which occur frequently but contain no meaningful content such as “the”, “a” etc.). Before we continue, let’s remove these stopwords. In the tidytext approach, this is done with an anti-join of our tidy text dataframe against a tidy dataframe containing a list of stopwords. We then order the dataset by the review id (called line) and by the word order position (position_in_review_0) in the raw data. We create a new word order variable, called position_in_review, which gives the position of each word in the cleaned data (without stopwords), while removing the position_in_review_0 variable created above.

The data (called cleaned_reviews) now look like this (only first 10 rows shown):

Our goal was to preserve the word order so that we can track the use of emotion words across the course of the review texts. The steps necessary to achieve this were somewhat involved, but we have reached our goal. We have retained the important words in the texts and, for each word, we have created a record of its position in the review.

As the reviews have differing numbers of words, we cannot simply compare the evolution of sentiment use across word number. Therefore, we will count the number of words in each review, and for each word, calculate its position in terms of its percentage in the words of the text. This will result in 101 different levels representing word position for each text (because we go from 0 to 1 in increments of .01). We will eventually aggregate the data to this level, making it possible to visualize the use of emotion words across the different percentages of the review texts.

Our data now look like this (only first 10 rows shown):

There are a number of different ways of analyzing sentiment in text. One common approach is to use dictionaries, which contain pre-defined lists of words which are categorized as belonging to a particular type of higher-level characteristic we wish to understand (e.g. in the case of sentiment - positive, negative, or more fine-grained such as excitement, anxiety, etc.).

Indeed, there are more than twice as many negative than positive words in the bing dictionaries.

Let’s look at the most frequent positive and negative words from the bing dictionaries in our review data. We can make a word cloud with code directly adapted from the tidytext vignette to do this: 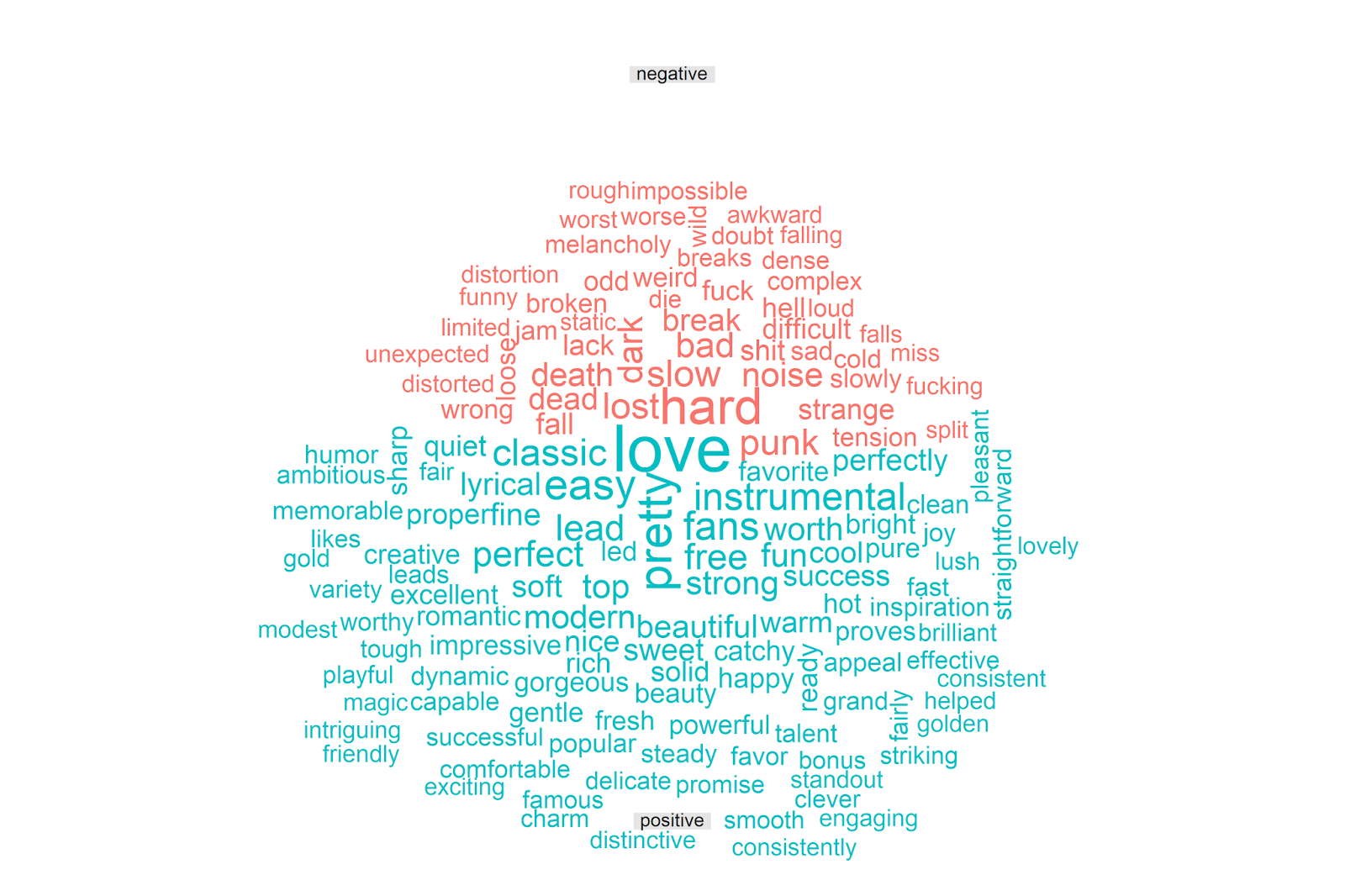 The vast majority of the words make sense to me, and seem to capture positive and negative things one could say about music in the context of an album review. It is amusing to see that “punk” is classified as negative, which makes sense in many contexts but is a bit off here. This is the downside of using general-purpose text classification dictionaries; overall they can perform quite well but they are by design not adapted for the specifics of every corpus. Despite these small imperfections, the above visualization makes clear that the bing dictionaries are picking up on meaningful indicators of sentiment in the Pitchfork reviews.

Note that, in the analysis below, I will treat positive and negative sentiment separately. The analysis presented in the tidytext vignette analyzes an overall sentiment score (e.g. sentiment = positive - negative). However, this seems strange to me for 2 reasons. First, as we saw above, there are twice as many negative (vs. positive) words in the bing corpus. Second, there is a large literature in psychology that suggests that positive and negative affect are orthogonal (independent); this logic underpins the measurement of affect in the widely used PANAS questionnaire, for example.

Let’s then apply these dictionaries to our data, in order to extract both positive and negative sentiment at each percentage of our review texts.

The resulting dataset, called pitchfork_sentiment, looks like this (only first 10 rows shown):

We will produce our plots using the excellent ggplot2 package, which also is built according to the tidy data philosophy. From the tidy perspective, our data are problematic in that the values we want to visualize (mean_positive and mean_negative) are contained in two different columns. Therefore, in order to plot using ggplot2, we must transform our data from a wide to a long format, putting our observations in a single column, with an additional column containing the sentiment type (positive or negative).

Which gives us (only first 10 rows shown):

Our input dataframe (pitchfork_sentiment) had 909 rows, and because each row had a value for both positive and negative sentiment, our long dataframe (called long_sentiment_by_genre) has 1,818 rows.

We are now ready to plot the average number of positive and negative sentiment words across the course of the reviews. We’ll first produce a plot of the overall data (not split by genre), using loess regression to visualize the overall trends per sentiment type. Note that I set the limits of the y axis to focus on the loess regression lines:

Which produces the following plot: 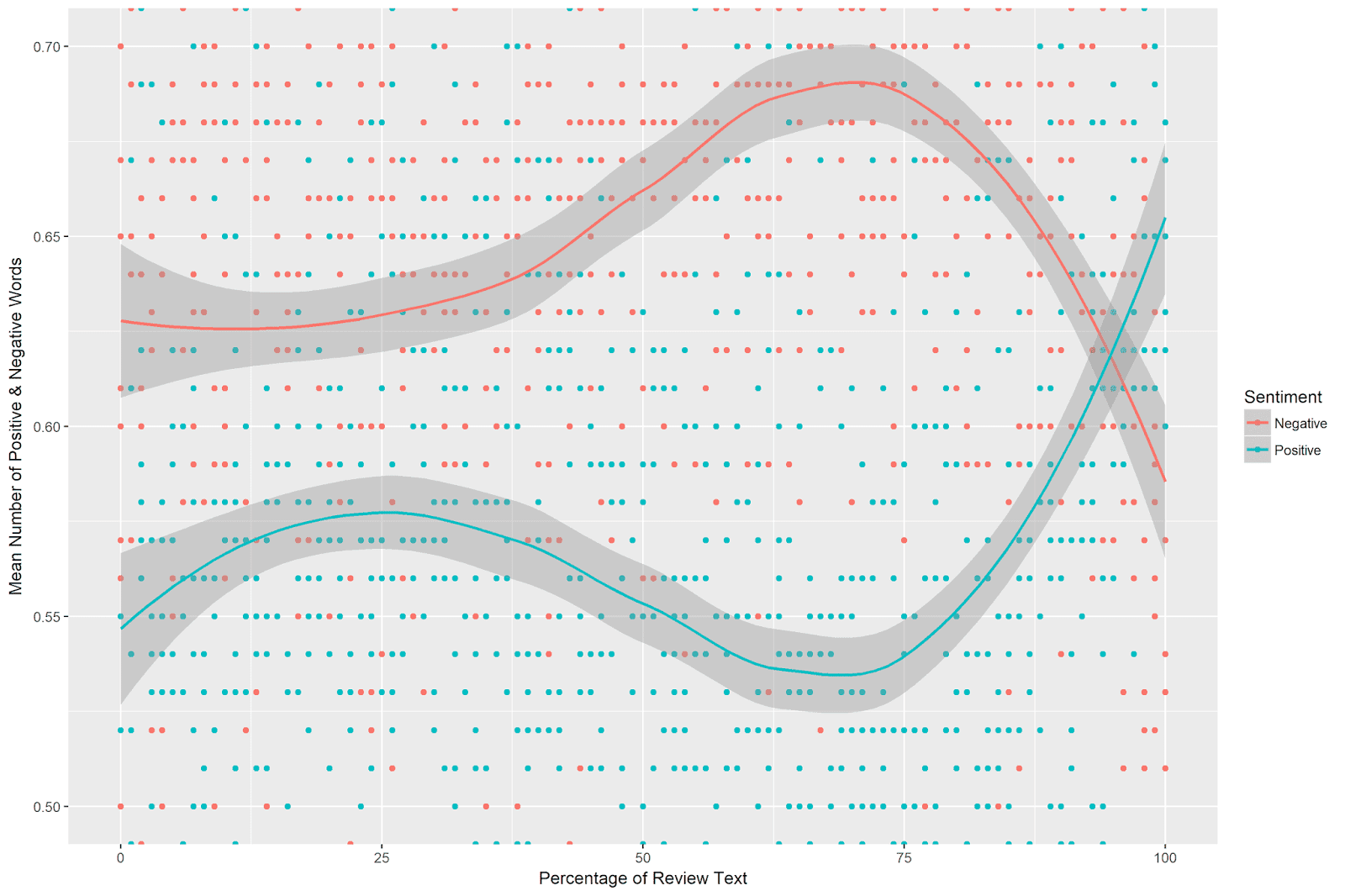 We can also examine the course of positive and negative sentiment across the reviews for the different genres. This requires just a slight modification of the above code to use genre as a facet (note I again specify the range of the y-axis in the plot to highlight the trends): 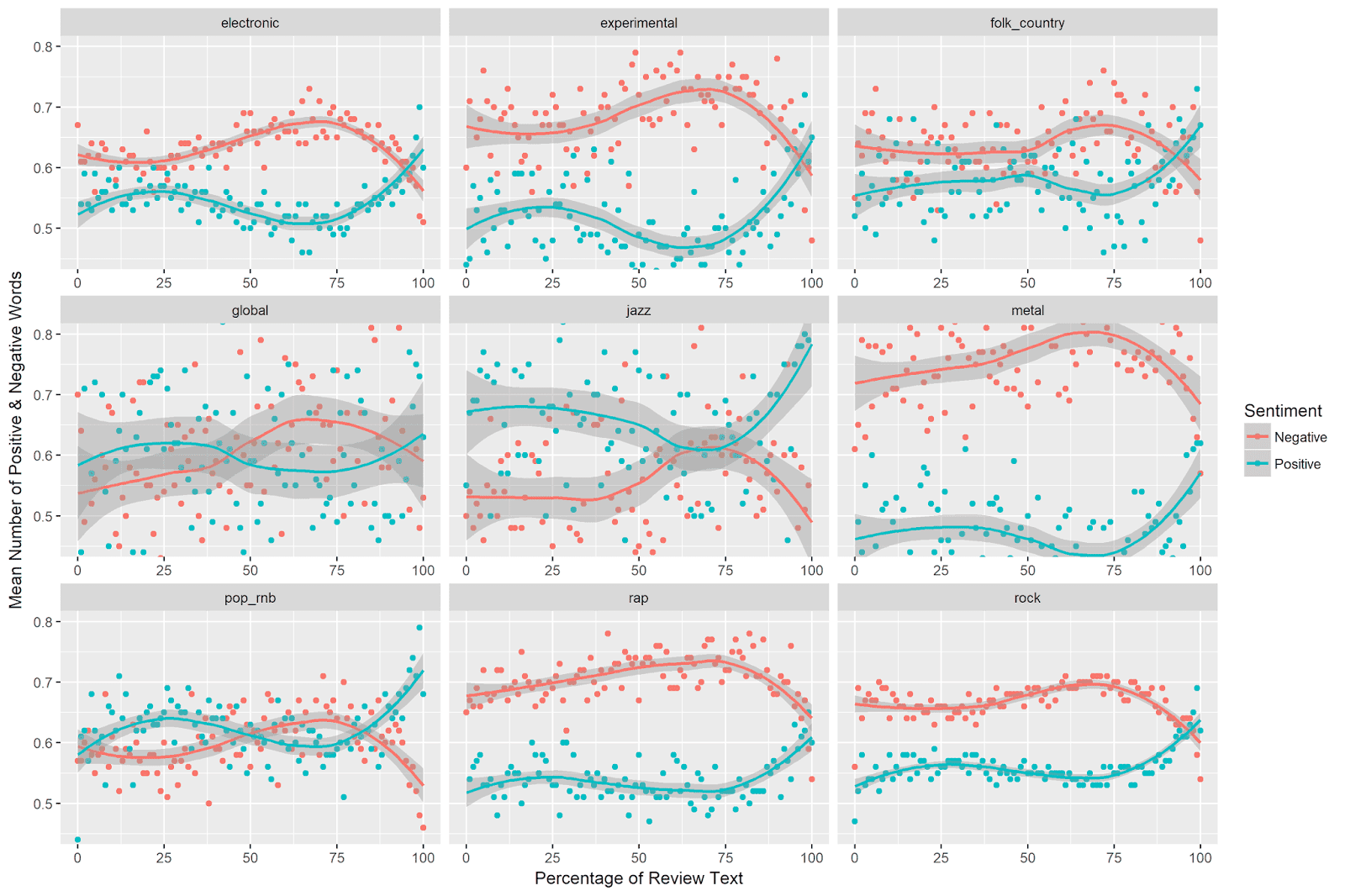 One way to interpret observed effect sizes is by using domain knowledge, e.g. expertise accumulated through previous work in the domain. Unfortunately, we’re using a very specific metric here (mean number of words across percentages of a text), and I don’t know of any existing studies using this type of coding. This is the first time I myself have used this approach!

For classical statistical models, there are statistical definitions of effect size, but these do not apply to the type of local regression (loess) models we are using here.

One principal that I’ve heard mentioned a number of times is that an effect worth considering should be visible with the naked eye. The trends are quite striking in the above plots, but I’ve set the axes in such a way that the differences are highlighted. What happens if we plot the data, but allow the y-axis to be defined by the minimum and maximum observed values of mean positive and negative sentiment? (Note that this approach parallels the underlying logic of most measures of effect size, which compare observed differences scaled to some measure of variation in the data.)

The plot (obtained by using the above code with the coord_cartesian command removed) looks like this: 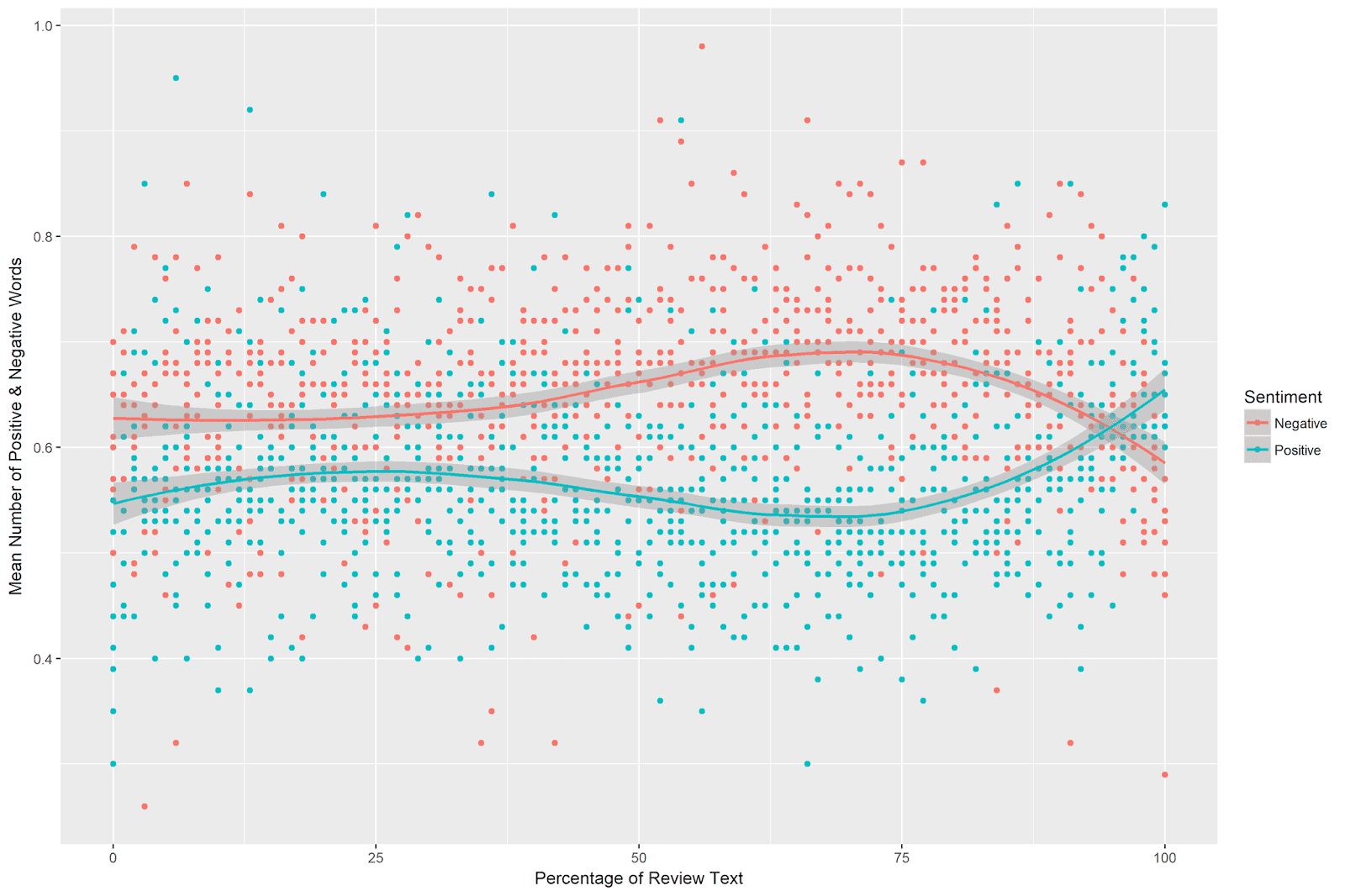 The patterns still looks clear to me. Even when shown across the observed values of mean sentiment, the divergence and subsequent reversal in sentiment use is easily observable.

In the next post, I will continue exploring the Pitchfork music reviews with the tidyext package. Specifically, we will examine how word usage differs according to the genre of the album being reviewed.