In a number of upcoming posts, I’ll be analyzing an interesting dataset I found on Kaggle. The dataset contains information on 18,393 music reviews from the Pitchfork website. The data cover reviews posted between January 1999 and January 2016. I downloaded the data and did an extensive data munging exercise to turn the data into a tidy dataset for analysis (not described here, but perhaps in a future blog post).

The goal of this post is to describe the similarities and differences among the music genres of the reviewed albums using cluster analysis.

After data munging, I was left with 18,389 reviews for analysis (there were 4 identical review id’s in the dataset; visual inspection showed that the reviews were identical so I removed the duplicates).

The head of the dataset, called “categories,” looks like this:

As we can see, each album has numeric values on all of our 9 genres. The album in the last row of the data shown above does not have a genre attached to it.

Let’s first answer some basic questions about the music genres. How often is each genre represented in our 18,389 reviews? We can make a simple bar plot using base R with the following code: 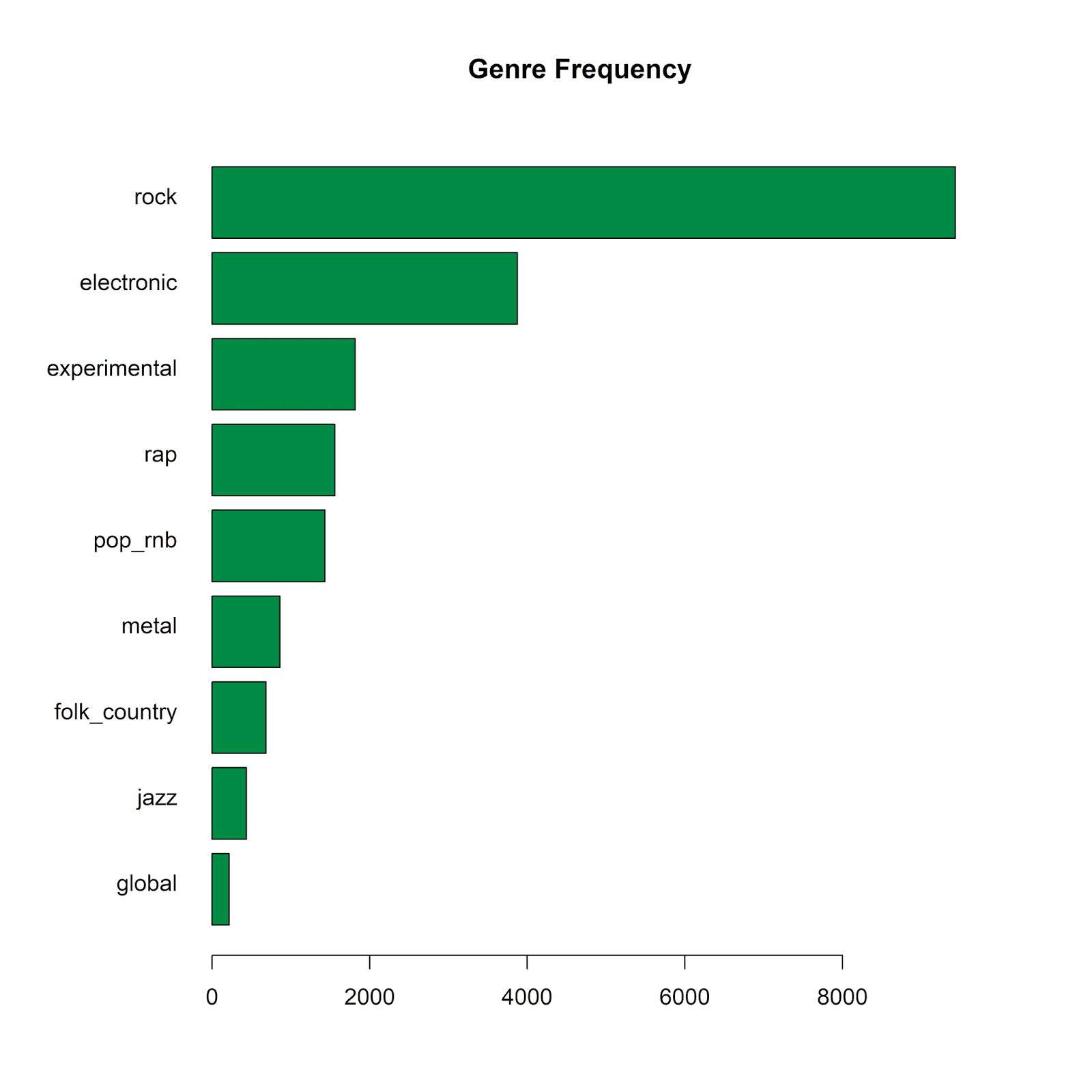 Rock is by far the most frequently-occurring genre in the dataset!

In order to cluster the music genres, we first must make a matrix which contains the co-occurrences of our dummy-coded genre variables with one another. We can use matrix multiplication to accomplish this, as explained in this excellent StackOverflow answer:

The resulting co-occurrence matrix, called “out”, is a 9 by 9 matrix containing the counts of the genre co-occurrences together in the data:

We can now proceed with the cluster analysis. We will use hierarchical clustering, an algorithm which seeks to build a hierarchy of clusters in the data. This analysis will produce groupings (e.g. clusters) of music genres. We will visualize the results of this analysis via a dendrogram.

This calculation makes clear our definition of genre similarity, which will define our clustering solution: two genres are similar to one another if they have similar patterns of co-occurrence with the other genres.

Let’s calculate all pairwise Euclidean distances with the dist() function, and check our manual calculation with the one produced by dist().

As noted in the R syntax above (and shown in the bottom-right corner of the distance matrix below), the distance between rap and rock is 1789.096, the same value that we obtained from our manual calculation above!

To perform the clustering, we simply pass the distance matrix to our hierarchical clustering algorithm (specifying that we to use Ward’s method), and produce the dendrogram plot.1 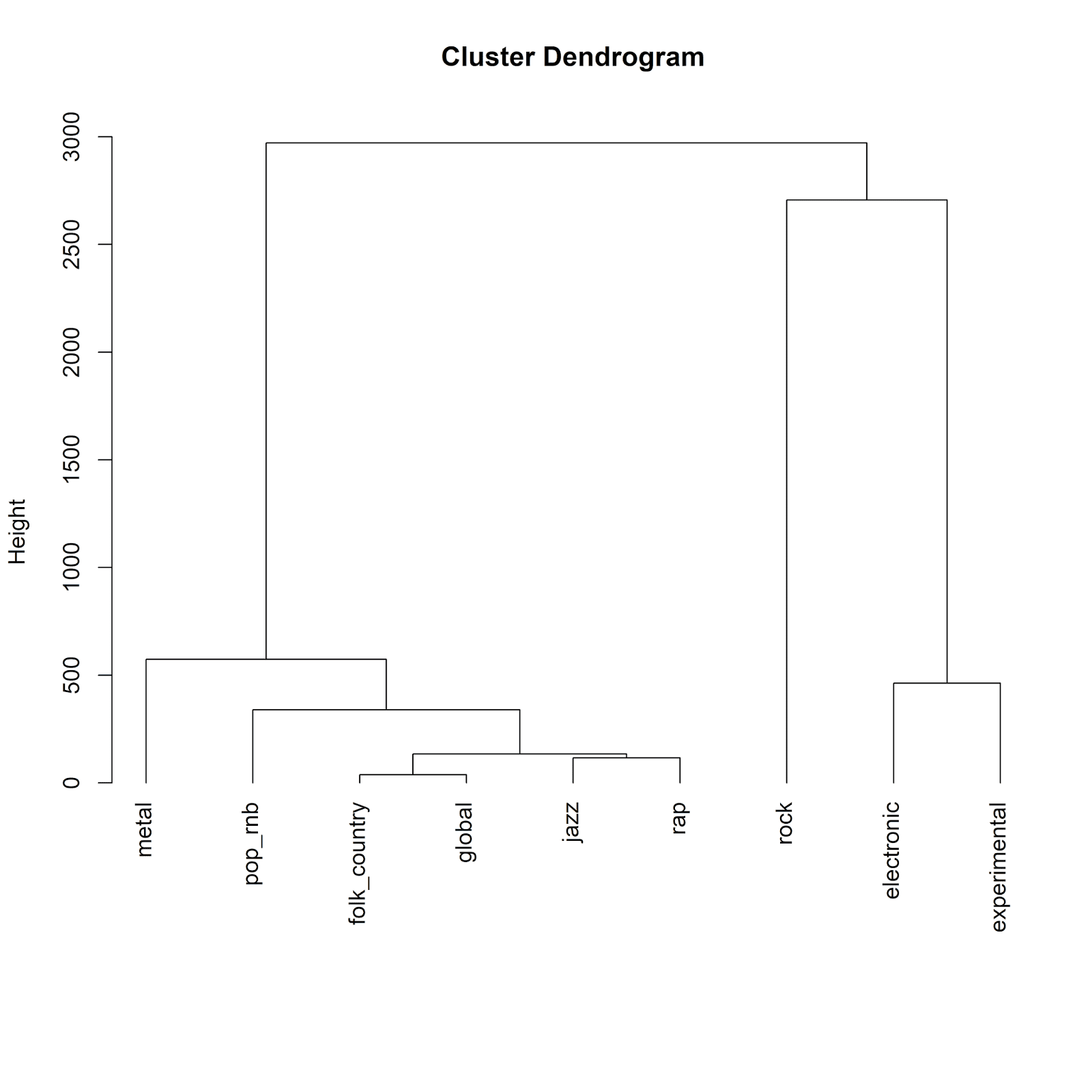 The hierarchical clustering algorithm produces the organization of the music genres visible in the above dendrogram. But how many clusters are appropriate for these data?

There are many different ways of choosing the number of clusters when performing cluster analysis. With hierarchical clustering, we can simply examine the dendrogram and make a decision about where to cut the tree to determine the number clusters for our solution. One of the key intuitions behind the dendrogram is that observations that fuse together higher up the tree (e.g. at the top of the plot) are more different from one another, while observations that fuse together further down (e.g. at the bottom of the plot) are more similar to one another. Therefore, the higher up we split the tree, the more different the music genres will be among the clusters.

If we split the tree near the top (e.g., around a height of 2500), we end up with three clusters. Let’s make a dendrogram that represents each of these three clusters with a different color. The colored dendrogram is useful in the interpretation of the cluster solution. 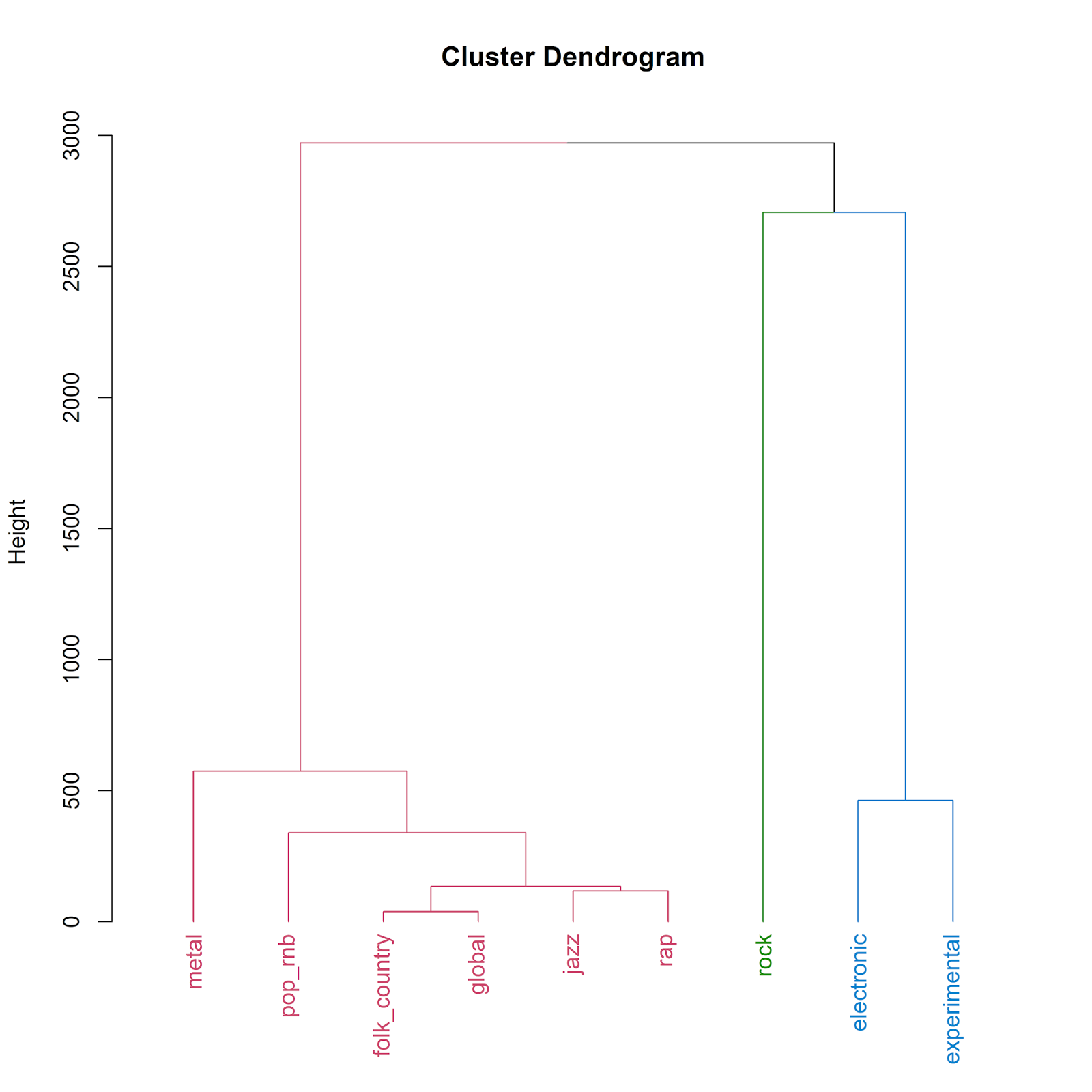 Interpretation of the Clusters

The three clusters identified by our chosen cut point are as follows. First, on the right-hand side of the plot, we see electronic and experimental music grouped together in a single cluster (colored in blue). Also on the right-hand of the plot, on the same branch but with a different leaf and colored in green, we find rock music which constitutes a cluster in and of itself. These two clusters (electronic + experimental and rock) are distinct, yet they share some similarities in terms of their co-occurrences with other music genres, as indicated by their fusion at the top right-hand side of the dendrogram.

On the left-hand side of the dendrogram, we see the third cluster (colored in pink) which encompasses metal, pop/r&b, folk/country, global, jazz *and *rap music. Our chosen cut point lumps all of these genres into a single cluster, but examination of the sub-divisions of this cluster reveals a more nuanced picture. Metal is most different from the other genres in this cluster. A further sub-grouping separates pop/r&b from folk/country, global, jazz and rap. Folk/country and global are fused at the lowest point in the dendrogram, followed by a similar grouping of jazz and rap. These two pairings occur very close to the bottom of the dendrogram, indicating strong similarity in genre co-occurrence between folk/country and global on the one hand, and between jazz and rap on the other hand.

Substantive Interpretation: What have we learned about music genres?

Rock music is the only music genre to get its own cluster, suggesting that it is distinctive in its patterns of co-occurrence with the other genres.

We must keep in mind the following statistical consideration, however. Rock music was the most frequent genre in the dataset. One of the reason rock’s Euclidean distances were so large is that, because this genre occurs so frequently in the data, the distances calculated between rock and the less-frequently occurring genres are naturally larger.

The blue cluster in the dendrogram above groups electronic and experimental music together. One reason for this might be because these genres are both relatively more modern (compared to, say, jazz or folk), and therefore share some sonic similarities (for example, using electronic or synthetically generated sounds) which leads them to be used in a similar way in conjunction with the other music genres.

The remaining genres fall into a single cluster. Within this cluster, it seems natural that metal is most different from the other genres, and that pop/r&b separates itself from folk/country, global, jazz and rap.

Pop and R&B are different, in my vision, from folk/country, global, jazz and rap music in that the former feature slick production styles (e.g. a tremendously layered sound with many different tracks making up a song), electronic instrumentation (e.g. keyboard synthesizers and drum machines) and a contemporary musical aesthetic (e.g. auto-tuning to produce noticeably distorted vocals), whereas the latter feature more sparse arrangements and fewer electronically-produced sounds.

Finally, jazz and hip-hop, although quite different in many musical aspects, share a similar aesthetic in some ways. Hip-hop, for example, has long made use of samples from older records (including many jazz tunes) to create beats (although recent hip-hop sub-genres such as trap music make use of drum machines and synthesizers for a more mechanical sound). One testament to the complementary between jazz and rap are number of recent notable collaborations between artists in these two genres: Kendrick Lamar’s excellent 2015 album To Pimp a Butterfly contains a number of tracks featuring jazz musicians and jazz instrumentation, the jazz pianist Robert Glasper has made a several collaborative albums featuring rap artists, and the jazzy group BadBadNotGood made an excellent album with the always brilliant Ghostface Killah.

In this post, we clustered music genres from albums reviewed by Pitchfork. Our original dataset contained dummy-coded indicators for 9 different music genres across 18,389 different albums. We used matrix multiplication to create a co-occurrence matrix for the music genres, which we then turned into a distance matrix for hierarchical clustering. We cut the resulting dendrogram high up on the tree, obtaining three separate clusters of music genres: 1) rock 2) electronic and experimental and 3) metal, pop/r&b, folk/country, global, jazz and rap. This clustering solution seems to align with the production styles, sonic and musical qualities, and past and current cross-pollination between the various music genres.

In the next post, I’ll use R to produce a unique visualization of a very famous dataset. Stay tuned!