In this post, we will examine the harmonic properties of songs in my music collection. We will focus on two primary aspects of the music: the mode (e.g. whether the songs are played in major or minor keys), and the musical key itself (e.g. C major, D minor, etc. - “tonal home” for the songs). Finally, we’ll explore differences across genres in the modes and keys that the music is played in, and use this information to simultaneously cluster the musical keys and genres.

The data for this blog post come from the digital music (.mp3) files on my computer. I have most of the music I’ve listened to over the past 10 years in a digital format, and I extracted the artist, album, and musical genre information from ID3 tags included in the files (using code adapted from a previous blog post).

The data and code for this analysis are available on Github here.

The head of the raw data looks like this:

Number of Songs Per Genre

As a first step in this process, let’s take a look at the frequency of the genres in our data set: 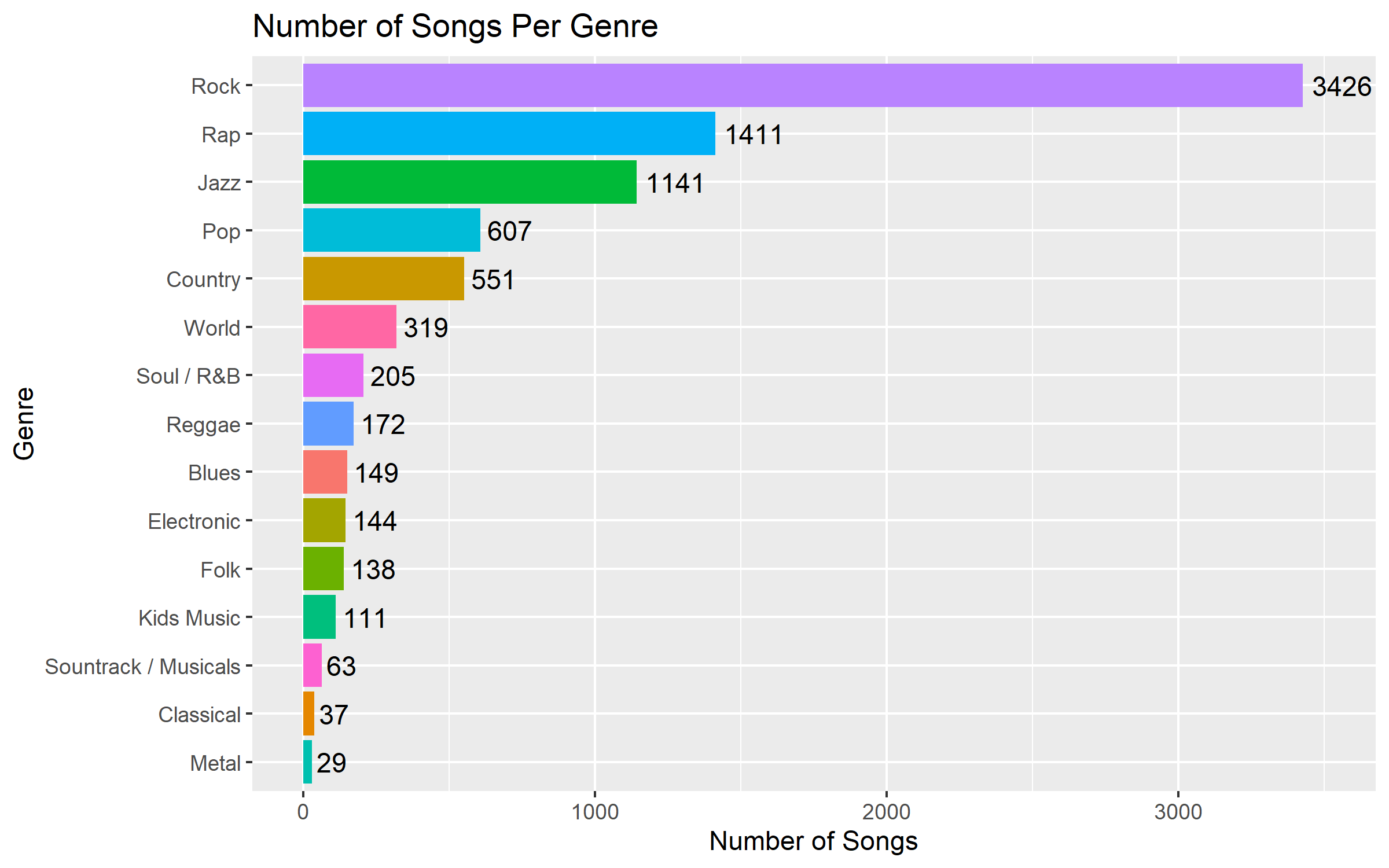 The top three genres are rock (3,426 songs), rap (1,411 songs) and jazz (1,141 songs). This matches my intuition - it’s definitely the type of music that I listen to. It must be noted that “rock” is somewhat of a catch-all genre, encompassing many different sub-categories. What most of these songs have in common is that they are primarily guitar-driven.

Mode Analysis Across All Songs

Let’s first take a look at the mode of the songs. The mode is a property that describes the tonal base of a song. There’s lots to say about major and minor modes, and if you’re interested in learning more this Wikipedia page is a good place to start. A simple heuristic we can use for the present discussion is that major modes sound happy and upbeat, whereas minor modes sound sad and dark.

In this analysis, we will include all of the 8,503 songs across all of the genres. We can make a barplot of the distribution of major and minor modes like so: 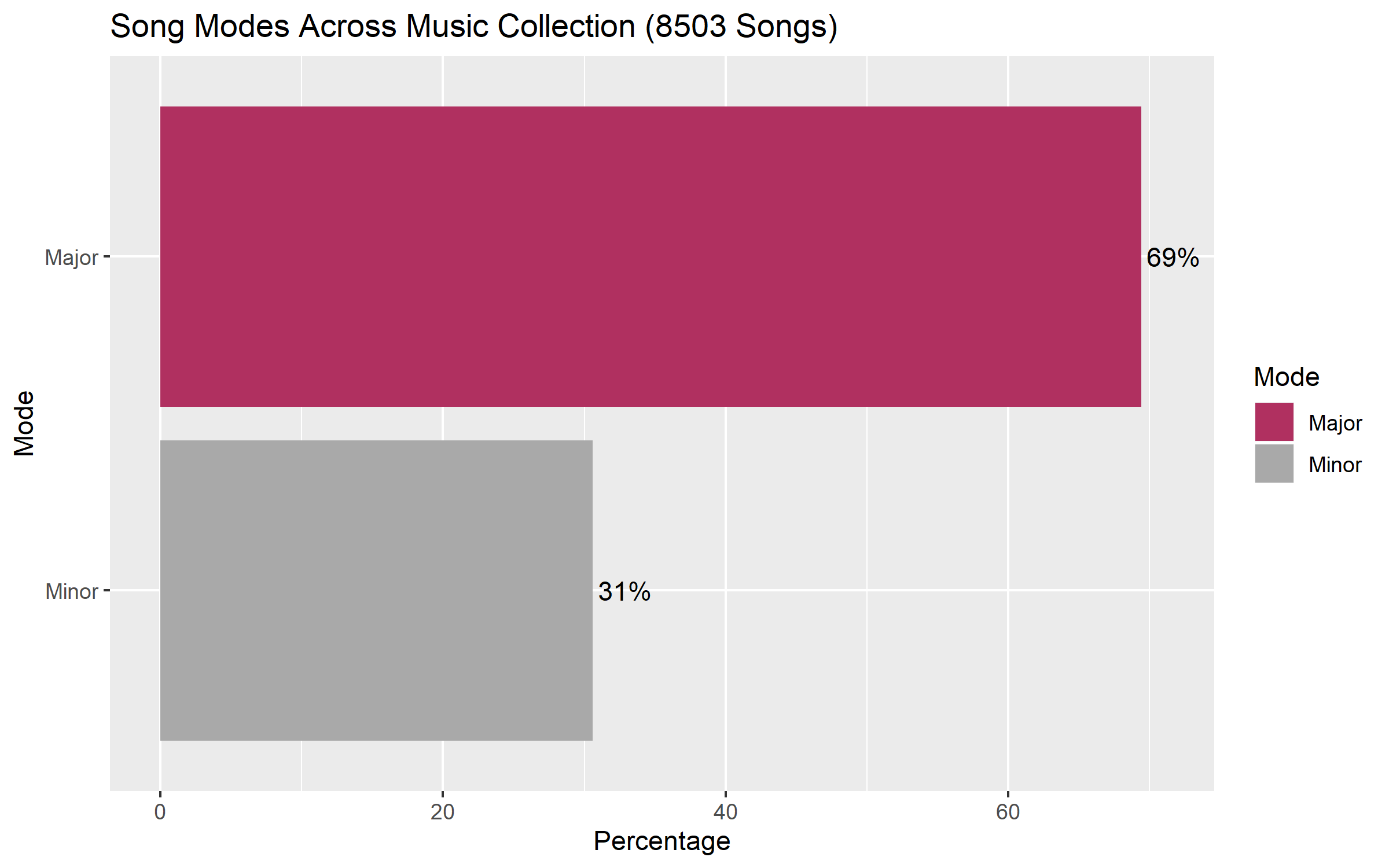 Across all of the songs in my music collection, nearly 70% of them are in major modes. I was expecting that the majority of songs would be performed in major modes, but was somewhat surprised by the size of the difference.

Now let’s look at the distribution of modes across genres. In the analysis below, I only select genres with over 200 songs, and I exclude rap music. The logic is that we’re focused here on musicians playing instruments, whereas rap music is often built around samples (which borrow from existing recordings, although there are definitely exceptions!).1

Let’s look at the modes across the different genres: 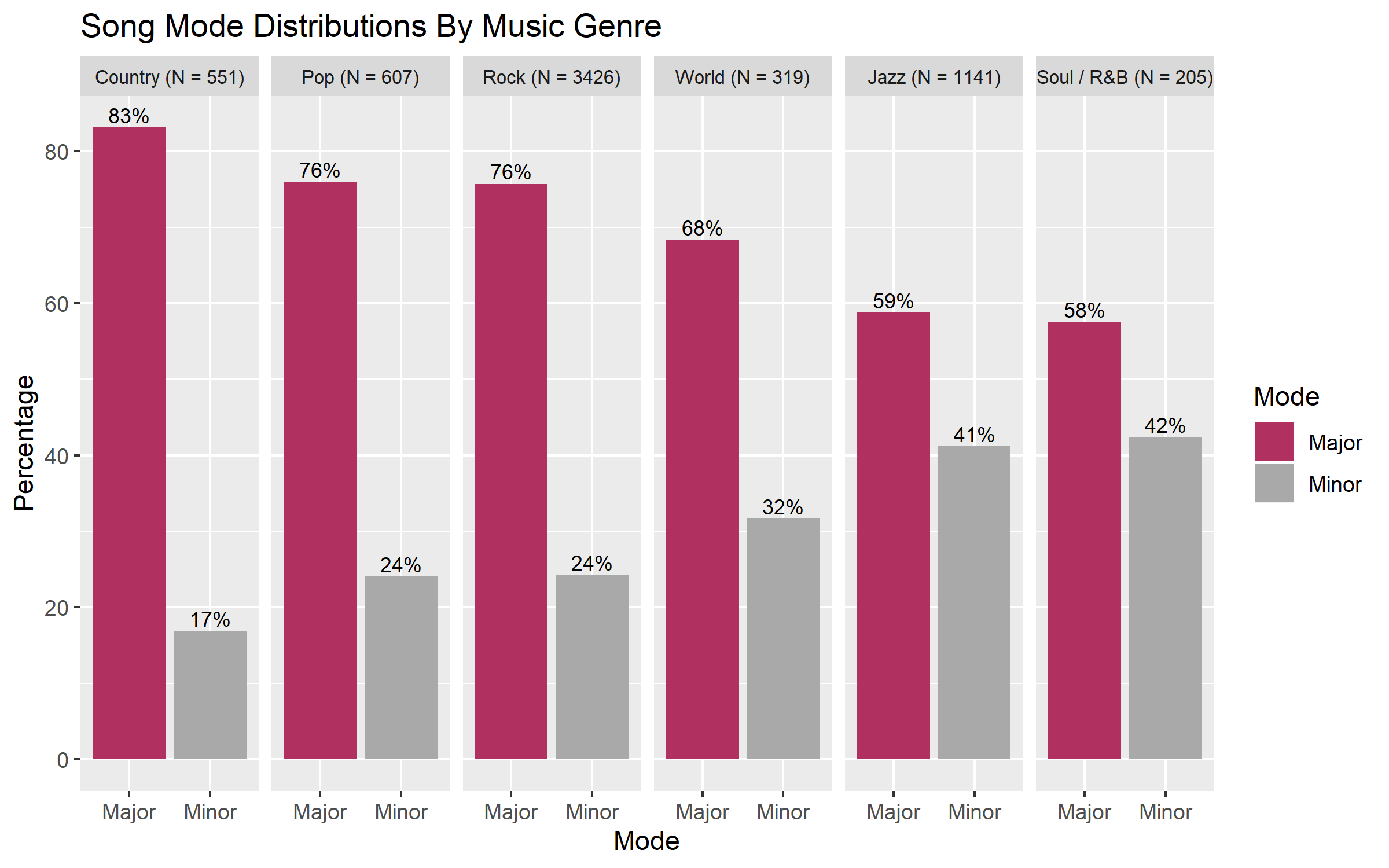 Key Analysis Across All Songs

Now let’s take a look at the keys that the songs are played in. The key refers to the “group of pitches, or scale, that forms the basis of a music composition.” I won’t get into the details of musical keys here (see this Wikipedia page to learn more), but for the purpose of this analysis it’s enough to know that there are 12 pitches (C, C#, D, Eb, etc.), each of which can be paired with a major or minor mode to produce a total of 24 different possible keys (e.g. C major, A minor, etc.).

We can plot the distribution of keys across all of the songs in my music collection with the following code:

Which returns this plot: 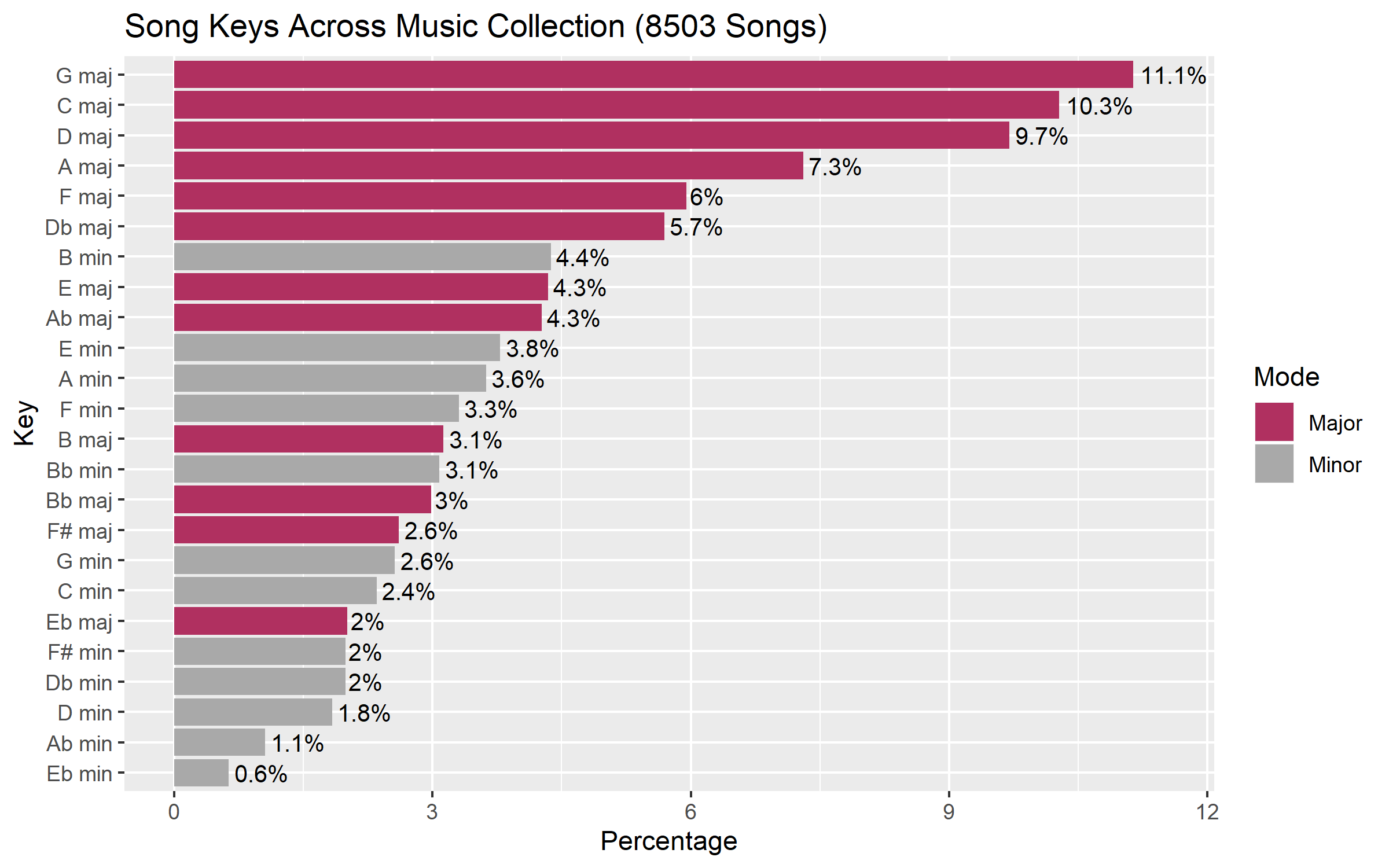 Now let’s separate our analysis of key distribution by musical genre - do the patterns above differ across the genres in our data? 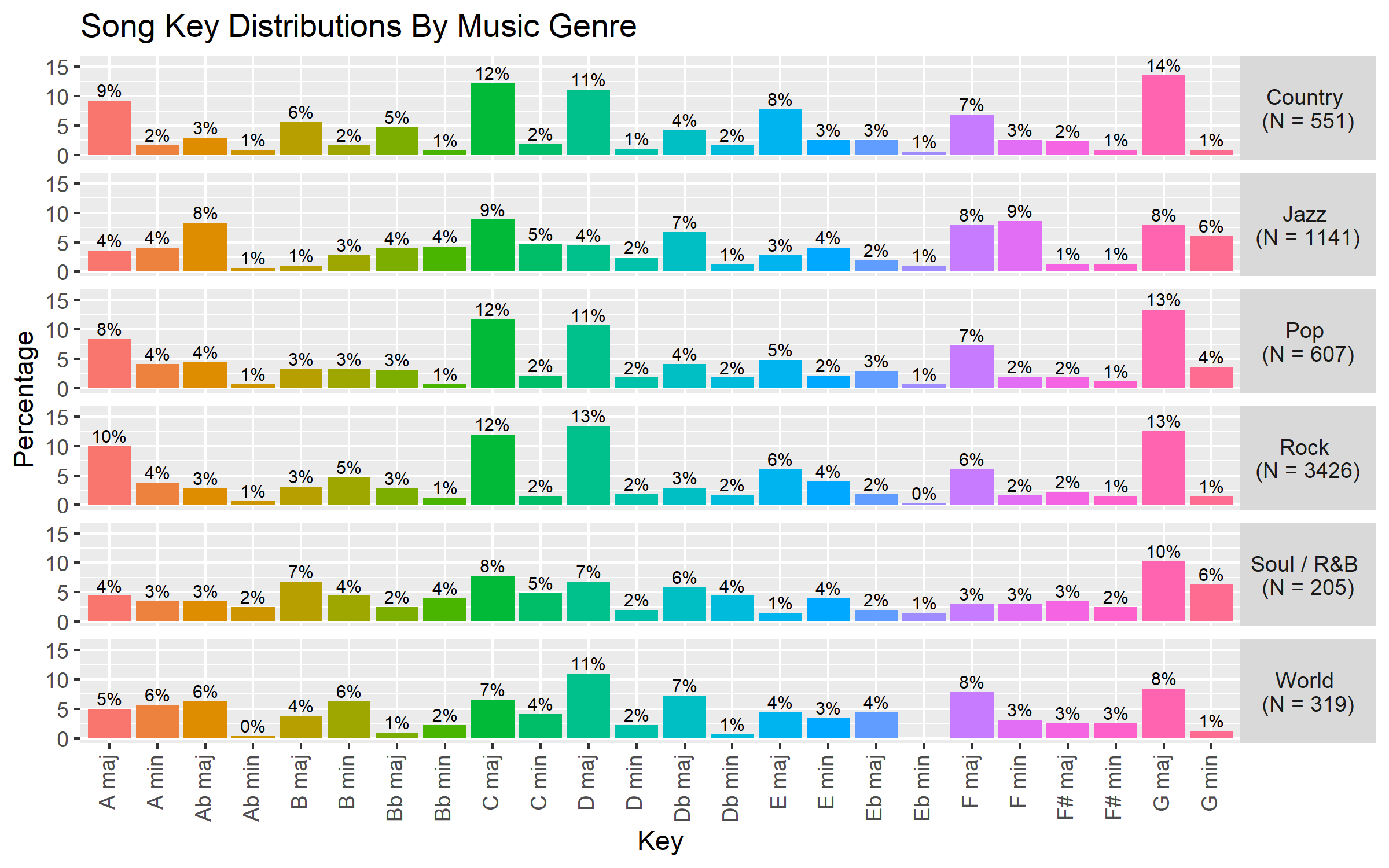 The above graph is complete but somewhat overwhelming. We see the relative percentage within each genre for each of the 24 different keys, with a separate facet for each genre. Some keys appear to be universally popular (e.g. G major has a share of 8-14% across the genres), whereas other keys are much more frequent in some genres as compared to others (e.g. A major is relatively popular in country, rock, and pop, but much less so in jazz, soul/r&b and world music).

It is possible to eyeball every one of the 24 keys and compare differences across the genres, but we can leverage the variation in these data to cluster the keys and genres into groups. Below, we will make a simultaneous clustering of both the keys and the genres to distill the differences we see above into a single analysis and heatmap visualization that will make the underlying structure clearer.

In order to make our heatmap, we need to extract the data we plotted above into a standalone dataset, which I do with the following code:

Our data set contains one row per genre, with the key row percentages contained in the columns:

The data above are expressed in percentages. For our cluster analysis, we need to scale the data so that each column has a mean of zero and a standard deviation of one.

We scale our data and display the resulting data set with the following code:

We are finally ready to make our heatmap. Heatmaps allow one to visualize clusters of samples and features. This method presents the results of hierarchical clustering of the rows (musical genre in our case) and columns (keys in our case) of a matrix, ordering the rows and columns according to the cluster solution. This makes it easy to see groupings present in both axes (clusterings of genres and clusterings of keys in our case). The underlying data values (percentages of songs in a given key for each genre, scaled per key) are represented with colors in the cluster solution.

Let’s use the gplots package to produce our heatmap: 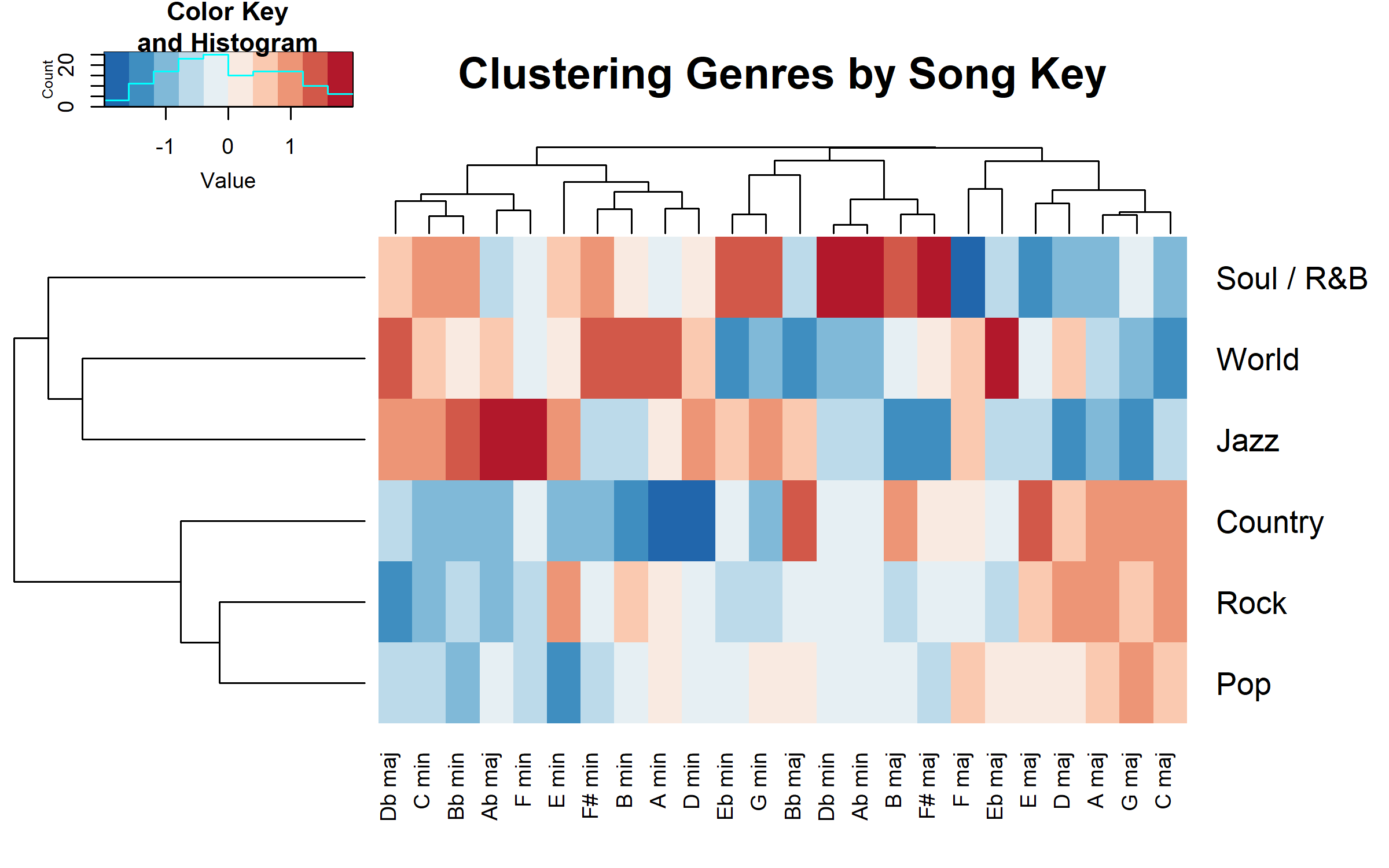 The plot shows a simultaneous clustering of the genres (the rows of our input matrix) and of the keys (the columns of our input matrix). We have passed standardized scores to the clustering algorithm, and the legend in the upper-left hand corner of the plot shows how the color-coding links to the values of these scores. Specifically, higher values are colored in red, while lower values are colored in blue. For each color, darker (lighter) shades indicate higher (lower) values.

The clustering of keys is a little more complicated, as there are 24 of them. The right-most cluster groups together a number of major keys: F, Eb, E, D, A, G, and C. We see several sub-clusters here, including a grouping of E, D, A, G, and C, which which we’ll discuss further below.

How are the genres separated by their use of different keys?

For the soul/r&b, world and jazz cluster, the keys colored in red at the upper-left hand side of the plot are most unique to this cluster. Specifically, songs in these genres are more likely to be in Db, C minor, Bb minor, and to some extent Ab and its relative minor F minor (though jazz is much more represented in these last two). Interestingly, these keys all have a lot of “flats.”

For the country, rock and pop cluster, the keys colored in red at the lower-right hand side of the plot are most unique to this cluster. Specifically, it looks like songs in these genres are more likely to be in C, G, A, D, and E. Interestingly, with one exception (C), these keys all have one or more “sharps”.

What factors influence the key a song is played in?

In my experience, there are at least 3 things that can influence the key a song is played in:

What does this analysis teach us about playing music in different genres? I think there are 3 takeaways for the practicing musician:

We should keep in mind that we are not examining a representative sample of songs; at the end of the day, this is just my music collection. Nevertheless, the patterns examined here match my experience as a musician playing songs in different genres with different bands across the years.

In this blog post, we examined the musical properties of songs in my digital music collection.

We made a heatmap to better understand the relationship between musical genres and keys. This analysis showed two clusters of musical genres: one containing soul/r&b, world and jazz music, and the other containing country, rock, and pop music. The soul/r&b, world, and jazz cluster had greater proportions of keys with a lot of flats, perhaps due to the fact that these genres typically include reed and brass instruments, which play in “easier” keys when the concert key has flats. The country, rock and pop cluster had greater proportions of easy keys with sharps, and these keys contain many “open chords,” which are easier to play on the guitar.

Finally, we looked at a couple of takeaway messages for the practicing musician. In sum: focus on the major modes, and if you want to play country, pop or rock, you can focus a handful of relatively easy keys with sharps. If you want to play jazz, world or sould/r&b, it’s a good idea to focus your attention on many different keys, and in particular to be comfortable in keys with many flats!

In the next blog post, we’ll examine how to extract, clean, and visualize data from the Mi-Band 5 fitness tracker.