In this post, we will return to the data set that we analyzed in the previous post. Last time, we calculated the similarity among the lyrical content of rap albums using pre-trained word vectors in spaCy. We used these similarity calculations to make an edge list, a specific data structure that represents a graph as a list of its edges. We then used this edge list to create a network visualization of influential rap albums.

In this post, we will again examine the data from our edge list, this time with the goal of identifying communities (e.g. groupings or clusters) of albums based on the network graph. We will use a well-known algorithm called the “Louvain algorithm” to identify the album communities, and we will add this information to our network visualization of influential rap albums.

You can find the data and code used for this analysis on Github here.

Our data consist of the edge list we created in the previous post. This dataset contains 831 rows, indicating the direction and strength of the linguistic similarity between album lyrics (our measure of “influence” from one album to another). For more details about how this data set was constructed, feel free to check out the full blog post.

Let’s load the raw data and see what it looks like:

As in the previous post, we will use the networkx package to create the network graph object, and pyvis to create an interactive visualization.

Our graph object has 815 nodes - quite a lot, but with an interactive visualization we can get away with this (it’s also possible to make static plots with the networkx library, but all of the nodes are very small and the text is mostly illegible).

The next step is to identify the communities within the network. We will use the Python-Louvain package to do community detection (for installation info see here).

We won’t go into the the details of the Louvain algorithm in this post (check out the Wikipedia article to learn more). The basic idea, however, is worth mentioning. In the language of network analysis, communities are defined as groups of densely interconnected nodes that are only sparsely connected with the rest of the network. The Louvain algorithm detects communities in networks using an iterative approach by grouping nodes in a network into communities, and optimizing the density of the edges inside the community with respect to the edges outside of the community.

We can apply this algorithm using the Python-Louvain library (imported with the name “community” in the code below), which takes a networkx graph object as input:

We now have a dictionary, called partition_object, which contains the mapping between each node (album) and the community that was assigned by the algorithm. Let’s take a look at the first 10 albums and see what our partition_object looks like:

It looks like the albums Death Certificate, Ferg Forever, and Pinata are all in community zero.

Before we can go to pyvis, we need to add some meta-data about the rap albums to our networkx graph object, which we can then display in our visualization. Specifically, we want to indicate, for each node, the community of the album as determined by the Louvain algorithm. We also want to add the name of the artist and the album release year for each node in our network.

In order to add these meta-data to the networkx graph object, we need to define dictionaries with the name of the node (which is the album name in our case) as the key, and the meta-data as the values.

We are almost there with the community meta-data. We have a dictionary which contains the mapping between node (album), and community (represented as a number). However, in order to use this information in the plot, we want to color the nodes in our network by community. We therefore need to map each community to a unique color.

As a first step, let’s extract the community codes from all of the nodes in our network:

We have 89 different communities in our network - which is a lot of information to convey with color. We will nevertheless give it a try in our plot below.

Our community information for each node is contained in a vector called values. Let’s take a look at the first 10:

I decided to use hex codes, which I generated using the amazing tool “I want hue”. Note that it’s basically impossible to generate 89 visually distinct colors; we’ll definitely have different clusters that appear in similar colors, but we should still be able to see the main patterns in our visualization.

We first make a mapping between the community codes (the numbers 0 to 88) and the color hex codes we define above:

We can examine the first 10 items in our dictionary:

We have successfully matched each community code to a different color hex code!

Now let’s replace the community codes in our partition_object with the color hex codes:

The first 10 items in our modified partition_object dictionary now look like this:

Awesome - we now have a mapping between each album title (node) and a color hex code representing the community assigned by the Louvain algorithm.

We can use this dictionary to set the “color” attribute in our networkx graph object:

Let’s check to see what meta-data we have about the first album in our node list, Ice Cube’s 1991 album “Death Certificate”:

Let’s again check the meta-data associated with our first node:

Our networkx graph object has been annotated with the community, artist, and album release year meta-data for each node. We’re now ready to make the interactive visualization with pyvis.

As in the previous post, I used the following function (which I found on Github) to convert the networkx graph object to a pyvis object:

We use the this function to pass our networkx graph object to pyvis, saving the plot out to an html file and displaying it in the Jupyter notebook:

Which reveals our network visualization of rap album communities. The visualization is zoomable and clickable - hover over the nodes to reveal the artist and album release year.

Some Observations about the Communities

It’s really interesting to see how the algorithm divides the network graph into communities. The communities around the exterior of the network are logical - clusters of nodes on the periphery are all assigned to the same community.

The more striking divisions are those separating the large center cluster into smaller communities of linked albums. Let’s quickly examine a single example. (Note: I have manually added the artist and album release year to the pictures below. This information is shown on the interactive graph when you hover over the nodes. Also, the graph is initialized randomly each time it loads. The layout of the nodes below might not match exactly with the layout you see, though the links will be the same.) 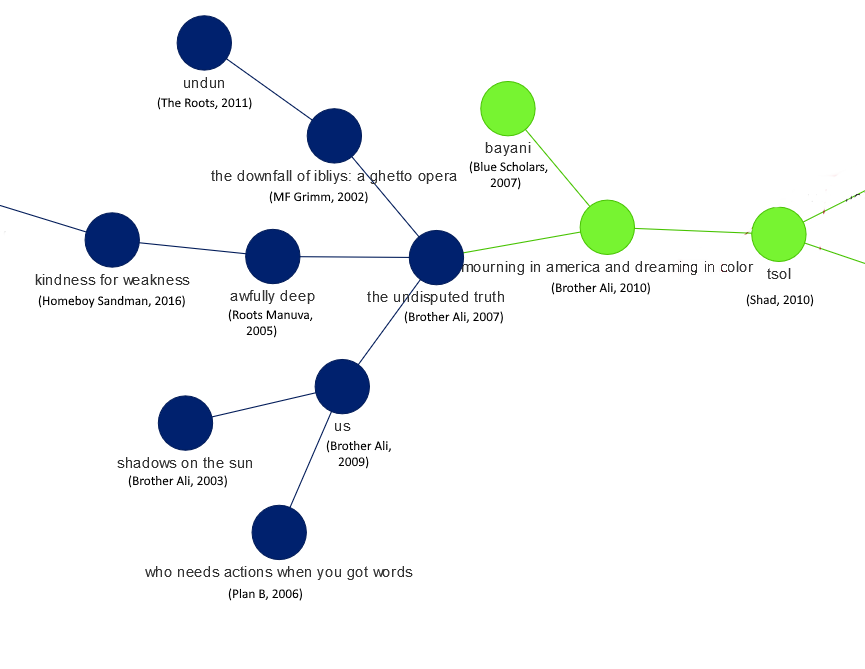 The above image shows a number of albums from Brother Ali. Interestingly, these albums fall into two different communities. On the left-hand side in blue, we see Shadows on the Sun, Us, and The Undisputed Truth. On the right side, in green, we see Brother Ali’s Mourning in America and Dreaming in Color. The Brother Ali albums are all related linguistically, but the inferred communities differ. It’s hard to say exactly why, but as others have written, Mourning in America is an overtly political album in many respects, much more so than the other Brother Ali albums in the picture. It is perhaps this stylistic shift that leads it to be connected to different albums, and therefore placed in a separate community.

The Added Value of Community Detection

This analysis is similar to the one described in the previous post (indeed, the links in the network graph are the same in both analyses). However, there are a number of benefits to the community detection exercise: 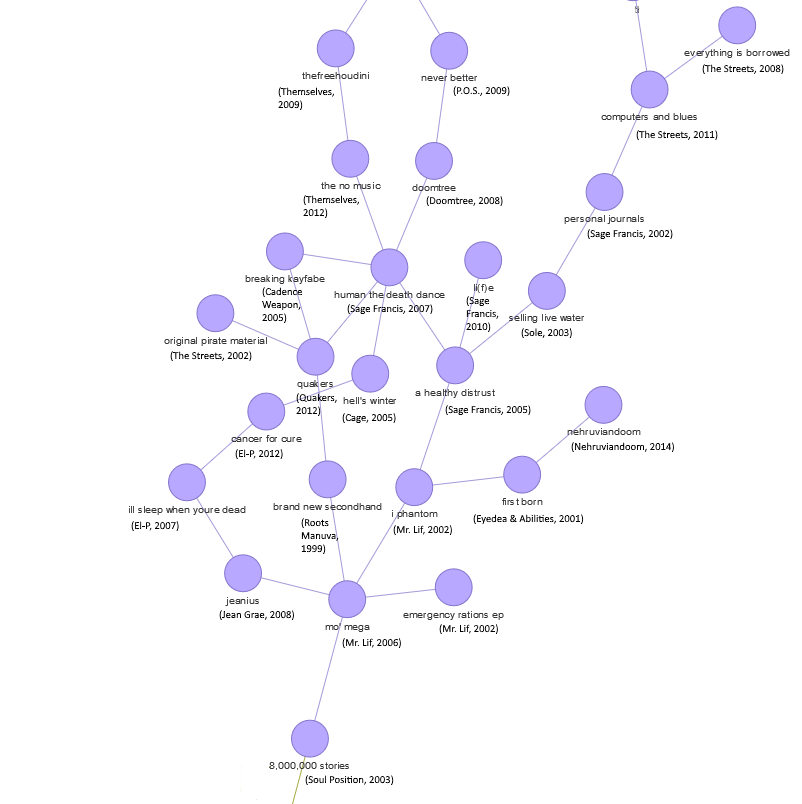 In this post, we returned to our network analysis of influential rap albums. Using an edge list that represents the linguistic similarity among rap albums reviewed by Pitchfork, we performed community detection using the Louvain algorithm. We extracted 89 different communities from our network graph, and displayed these communities with unique colors in our network visualization. The communities revealed distinct groupings of albums in our network, allowing us to detect sub-genres in rap music, and to make music recommendations based on album community membership.

In the next post, we’ll use deep learning and image recognition to make a model to classify the musical genres of album covers. Stay tuned!