In this post we will return to the data on Pitchfork music reviews, parts of which I’ve analyzed previously. The goal of this post will be to gain an understanding of distinctive words in the reviews of albums of different musical genres. This type of analysis helps us understand the musical aspects that distinguish written descriptions of the music from different genres, at least in the context of music reviews written by Pitchfork writers. We will again use R and the tidytext approach to structure our text data, and make use of a basic visualization technique to understand what words are used more in a given genre compared to the others.

As described in previous posts, these data were obtained from the Kaggle website. Because we are interested in exploring word use that is particular to specific genres, I excluded reviews with more than 1 genre from the scope of this analysis, leaving us with 12,147 review texts. As in the previous post, we will focus on 3 columns in our dataset: one column containing a unique review identifier, one column with the review text, and one column that contains the genre of the album being reviewed (with the following options: electronic, experimental, folk/country, global, jazz, metal, pop/rnb, rap and rock).

We will use the same data preparation steps as we did in the previous post. Our data frame is called text_df, and looks like this:

Our data processing steps will turn our original data (which contains one review per row) into a tidy data frame with one word per row, and meta-data in additional columns. We additionally remove stop words (words which occur frequently but have little meaning such as “the”) and punctuation. Finally, as there are some issues with strange punctuation (the dreaded “curly quotes”), we remove all additional characters which are neither numbers nor letters. These data preparation steps are essentially those I described in the previous post, but here I combine all the steps in a single dplyr chain:

As explained in the tidytext vignette and in the previous post, it is possible to construct a comparison cloud using tidy text data from within a dplyr chain (with an assist from the reshape2 package). The following code is adapted from the vignette; it passes our cleaned_reviews data to a dplyr chain that counts the words per genre, transforms the shape of the data, and finally makes the comparison cloud:1 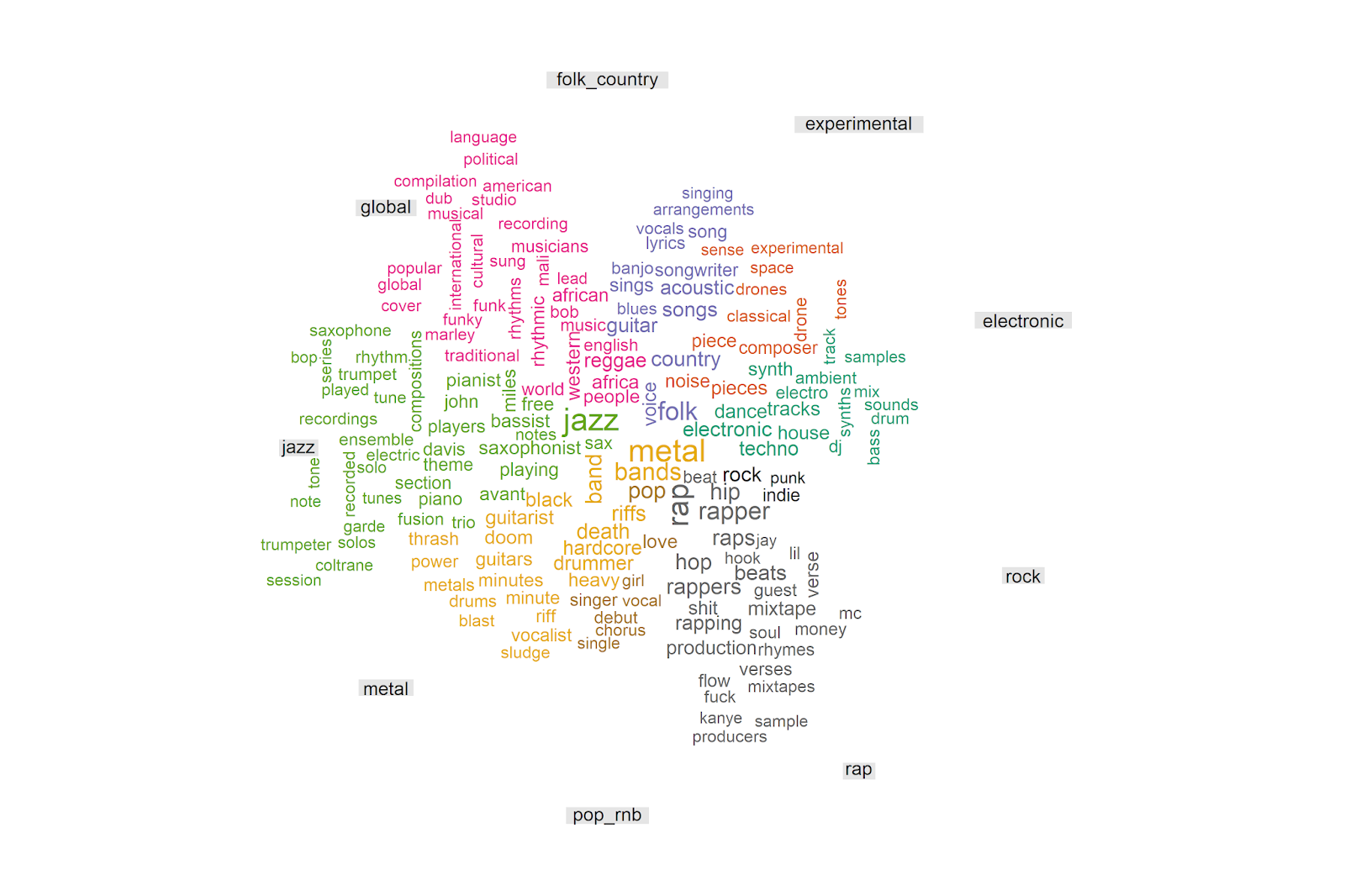 The visualization is quite revealing, and gives us a good sense of A) what musical aspects are mentioned in the reviews (e.g. what sonic or other musical qualities are deemed relevant to describe in a music review?) and B) how these music descriptions differ across the various genres.

We can see that the names of the genres (e.g. jazz, metal, pop, etc.) are among the most distinctive words. This is the case for every genre in our dataset. These descriptors no doubt center the subject matter of the reviews.

We also can see that these genres contain a number of different sub-genres. Indeed, “rock music” is not just a single type of music - we see here references to punk and indie, for example. The same goes for the other genres in our data. For metal, we see mentions of black metal and hardcore, for rap we see soul (no doubt describing samples used), for electronic we see house, drum and bass, and dance. Reviews for folk/country music contain more mentions of the blues, while global music reviews appear to contain the sub-genres of dub and reggae (although global music is of course much more varied), and finally for jazz we see the subgenres of free jazz and fusion (a mix of jazz and rock which was quite popular in the 70’s).

In sum, the name of each genre is mentioned in the reviews and this comes across clearly in the review texts. This is reassuring but unsurprising. However, the wordcloud also allows us to understand the inherent variation within each genre that is not captured by its simple descriptor, and to understand that there is, for example, black metal and free jazz.

What types of musicians are important in creating the music in the various genres? The wordcloud gives us some interesting insight into this question.

For metal, we see comparatively more mentions of drummers, guitarists, and vocalists (which is an interesting word choice - my guess is that this makes reference to the wide variety of vocal performances in the metal genre, which can range between melodic singing to shouting or screaming); the Pitchfork reviews seem to indicate that these three types of musicians are important when describing the important qualities of metal music. For pop, the important musician is clearly the singer; indeed, in pop music, the singer is the focal musician, whose role is both to deliver the vocal performance and to sell the record. For rap, we see comparatively more mentions of rappers, producers and MC’s; indeed, these are key figures within this genre of music (and are likely to be found only in this genre), and the ones who determine the sound and feel of a rap album. For electronic we see DJ, and for experimental we see mention of the term composer. For global, we see mention of musicians which is intriguing but frustratingly unspecific. The genre with the most unique mentions of different types of musicians is clearly jazz. The wordcloud gives us the sense that jazz is a genre that relies on a number of different instrumentalists, with saxophonist, bassist, pianist and trumpeter mentioned individually; we also see the importance of the interaction between them (with the mention of ensemble and players). Finally, folk and country make comparatively more mentions of songwriters and arrangements. My knowledge of country music is not very advanced, but my understanding is that the Nashville country music ecosystem is full of consummate professionals who write and arrange music for or with country music stars. Given that the story and narrative are very important in this genre, indeed often defining the track, its instrumentation and sound and feel, it makes perfect sense that the term songwriter occurs more frequently when reviewing folk/country albums.

What does the music sound like? This is a key notion (and simultaneously one of the most difficult things) to convey in a written album review. How do the Pitchfork reviews describe the distinctive instruments and sounds one would hear in albums of the different genres?

For metal, we see the mention of drums and guitars (the instruments played by the above-mentioned drummers and guitarists), and we can expect the music to contains riffs (likely from guitars) and to have a sludge-like sound. It will likely be loud (see the mention of heavy sounds such as power and blast). For pop, we should probably be focused on the vocal performance; we can bet that the songs have a killer chorus. In rap music, we should be focused on the beats, the production, and the hook (the “chorus” of a rap track) which likely contains a sample of a previous song, and the rapper’s flow and rhymes. For electronic music, we will likely hear a lot of synths (e.g. electronic keyboards) and ambient sounds. In experimental music, we will likely hear drones and noise, which have specific (unspecified in this analysis) types of tones. In country music, we are more likely to hear the banjo and guitar, notice the singer’s voice, to encounter instruments in an acoustic presentation, and to hear music in which the arrangement (e.g. the song structure and instrumentation) is notable. In global music, we’re more likely to encounter funky rhythms. Finally, in jazz, we are more likely to hear a number of different instruments: the saxophone, trumpet and piano. The rhythm is important, as are the notes which we’ll likely hear in the solos. More so than in the other genres, the playing of the music is important in jazz (especially the musician’s tone), and we will likely encounter compositions with distinct sections.

In this post, we used tidytext principles to clean and prepare the Pitchfork album review texts and to construct a word cloud to visualize the most distinctive words in the different musical genres. We first turned our raw dataset into a tidy format, and performed some basic cleaning (removing punctuation and stopwords). We then constructed a comparison cloud using the cleaned tidy data, which allowed us to see which words are unique for the reviews of music from different genres. The resulting visualization complements and expands our understanding of the sub-genres, musicians, instruments and musical qualities, and the subject matter of different genres of music.

In the next post, we’ll use a multi-level model to construct pairwise comparisons of many different means. The method is one described by the statistician and blogger Andrew Gelman, and is often mentioned on his blog. It provides an interesting solution to a traditionally difficult statistical problem.