In the next series of posts, I’ll describe some analyses I’ve been doing of a dataset that contains information about wines. The data analysis is done using Python instead of R, and we’ll be switching from a classical statistical data analytic perspective to one that leans more towards the statistical and machine learning side of data analysis. All the code I share below is for Python 3, which I’ve run via an IPython console in Spyder on a Linux operating system.

Description of the Data

[Edit: the data used in this blog post are now available on Github.]

The wine data consist of 2000 records, 1000 describing red wines and 1000 describing white wines. These data come from a much larger database of wine descriptions from a large online wine retailer.

For each wine, there are columns describing the name, year, abv (alcohol by volume), the retail price in US dollars, the appellation region, the varietal name, the wine type (red vs. white), and the winemaker’s notes (short text describing the wine, provided by the vintner). We will use a selection of these variables to predict wine price.

A screenshot of the first records can be found below:

Let’s begin by reading in the data and looking at the head of the dataframe. The pandas library is absolutely great for data munging and manipulation, while the numpy library is very handy for mathematical calculations and transformations. These two libraries work together very well; I often make heavy use of both when working in Python.

We can see the head of the dataframe in the screenshot above.

Let’s do a descriptive visualization of the key quantitative variables we will use in our analysis. The seaborn package is wonderful for making beautiful graphs out-of-the box. The distribution plot (distplot) shows the density of the distribution of a given variable on the y-axis, along the range of the variable (displayed on the x-axis). Note that there are some missing values for year- some additional wrangling is needed to plot this variable. 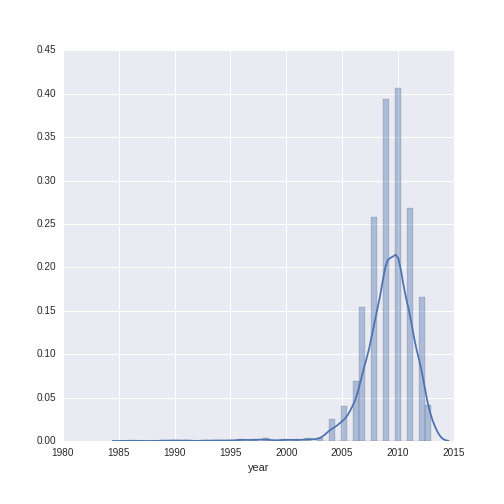 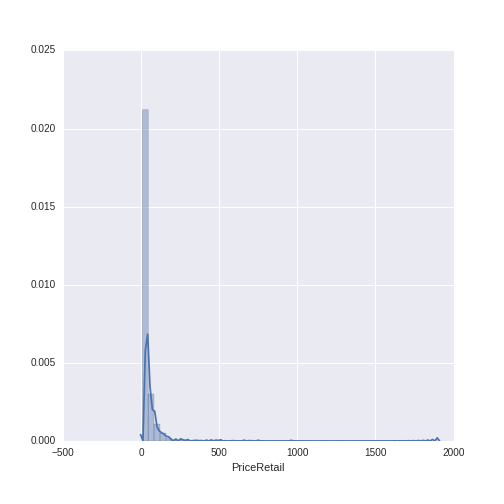 For modeling purposes, when using monetary data as the dependent variable (also called the outcome or target), it is often good to work with a log-transformed version of the variable. Let’s see what the distribution of price looks like when log-transformed (using the numpy library to do the log transformation): 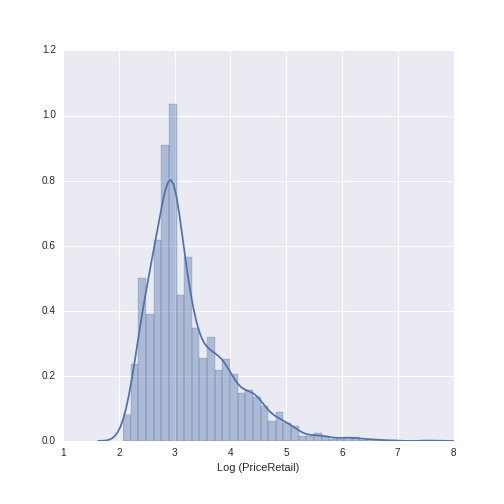 This distribution looks much more normal, and will be a good choice to use in subsequent modeling.

One final variable remains to be described, and that is the Appellation Region Name, which contains the region from which each wine originates. The *countplot *in seaborn makes a very nice representation of the counts of the appellation regions. 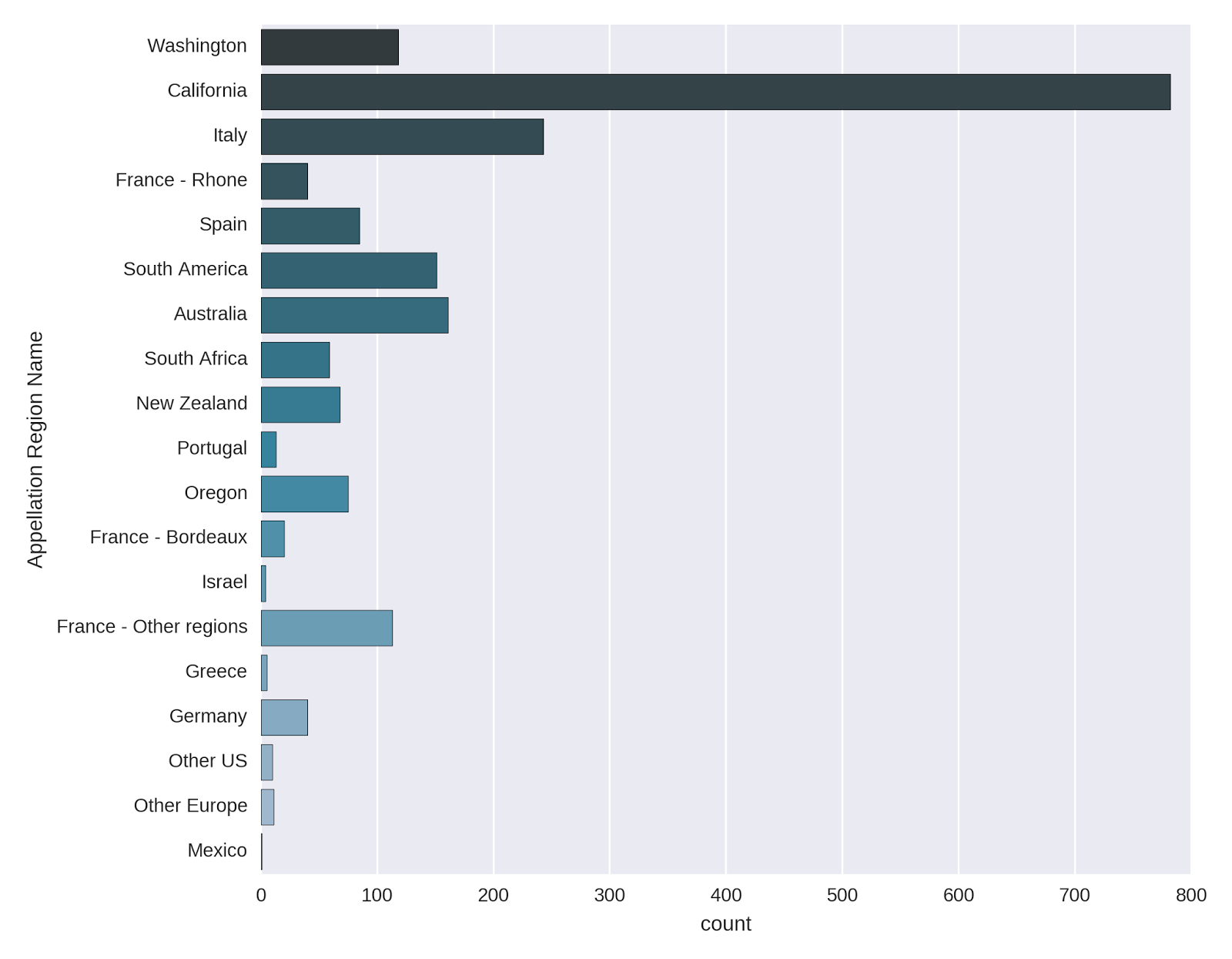 The vast majority of the wines come from California, with Italy, South America and Australia also well-represented. The French wines are also quite frequent, though they are split up according to region. I was surprised to see that Washington also has a fair amount of wines in the list.

In this post, I’ll be taking a look at predicting the price of the wines from the variables we’ve examined so far, namely: wine year, varietal wine type (e.g. red vs. white), and appellation region. We’ll be using sklearn, a great Python library for predictive modeling and machine learning.

We first need to set up a matrix of predictive variables; unlike R, sklearn requires you to do more extensive pre-processing of data before feeding them to a modeling algorithm. This comes into play for this analysis in the form of representing the categorical predictor variables (wine type and appellation region name) in numeric form via dummy coding. (Recall that in the models built in R that I’ve described in previous posts, categorical variables represented as text were automatically converted and passed directly to a model).

In classical statistical techniques, such as those we saw in the previous posts analyzing Accupedo data, a dummy predictor variable with G levels needs to be represented in the model matrix with G-1 dummy variables (which typically take the form of 0/1 to represent presence or absence of a category). Standard linear models will simply not run due to multicollinearity issues if A) an intercept is included and B) all levels of a categorical variable are represented with their own dummy: this is referred to as the “dummy variable trap.”

However, statistical and machine learning techniques are able to handle datasets with high (and even perfect) multicollinearity among predictors, and so we will take advantage of this when composing our predictor matrix.

The pandas function “get dummies” generates G dummy variables for a predictor with G levels; the dummy variables are represented as 0/1 to indicate the absence or presence of a category.

Below, I create a matrix of predictor variables. The Appellation Region Name has 19 levels, as we saw in the chart above. The pandas “get dummies” function therefore generates 19 different dummy variables to represent this information in the predictor matrix. The wine type variable only has two levels: red and white. Rather than including a dummy variable for each, I simply kept the dummy variable for red wines. Because there are only 2 levels needed to represent this variable, an effect for red wines automatically implies a difference between red and white. (Note that this is not the case for the Appellation Region Name, which has 19 different levels.)

The head of the predictor matrix looks like this:

We have 6 missing values for the “year” variable. These wines were simply missing this information. There are many solutions to dealing with missing data, such as: A) replacing missing values with the mean, mode, or median, B) creating dummy variables which indicate observations with missing values or C) using more sophisticated multiple imputation techniques, which borrow information across a data matrix to replace missing data with statistically plausible values. In the context of this example, I’ve decided to simply replace the missing year values with the median year for the entire dataset. This can be done with the sklearn preprocessing imputation function:

Now that we have done some basic visualization and pre-processing of the data, we are ready to begin with the predictive modeling.

The goal of this exercise is to predict wine price using the columns describing the year, appellation region and wine type (red vs. white) of each wine. This is a regression type problem, as we are interested in predicting a numeric value (as opposed to a class label). There are many methods available for such problems; here I’ll be using a Lasso regression model to predict wine price.

We will first split up our dataset into a training and test set. Sklearn has a very handy function to do this, called “train test split.” We’ll hold out 30% of the data as a test set, and train our model on the remaining 70% (called the training set). By specifying the random state (or seed), we ensure that we will always select the same observations for the training and test sets, if we want to re-run the model at a later point. Note that I am explicitly defining the outcome to be the log-transformed version of the price variable. As we saw above, the raw price values are heavily right-skewed, which can be problematic in regression modeling.

Now let’s compute a Lasso regression model. We import the function from sklearn, and use 10-fold cross-validation to choose the appropriate shrinkage parameter (the lambda or alpha value described above). The lassocv function in sklearn makes it possible to specify everything in one command. One final thing to note- because the penalized regression models apply a shrinkage factor to the size of the coefficients, we need to ensure that all of the variables are on similar scales. This is done via the normalization option in the lassocv function. The normalization ensures that the regression coefficients for each variable will also be on similar scales, and that the penalty factor has the chance to be applied “equally” to each variable.

Let’s first examine the estimates of the penalized regression coefficients. The code below extracts the coefficients, removes those that are shrunk to zero, and plots them. Note that we extract the column names from our predictors matrix, not the predictors_imputed matrix that we used in the model itself (which as we noted above contains no column names). 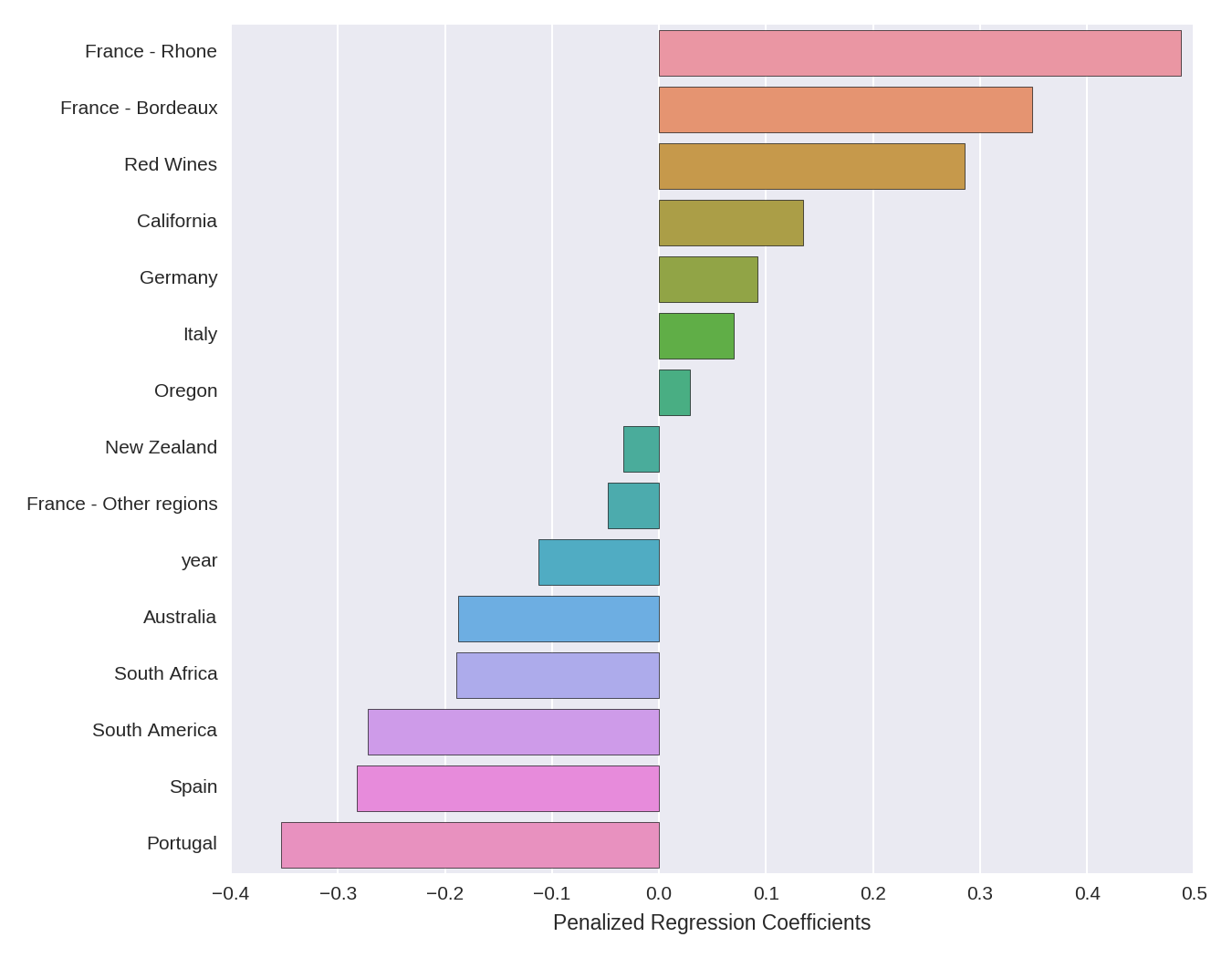 The size of the coefficients, however, are somewhat more difficult to interpret. Because the outcome is log-transformed, we can interpret a given coefficient as indicating percent changes in price (holding all the other variables in the regression constant), given a 1-unit increase in the predictor. However, we have to keep in mind the fact that A) the variables have been normalized (mean centered and divided by the l2-norm), so a 1-unit increase in a given predictor corresponds to an l2-norm increase in that predictor, and B) the coefficients are penalized, so the estimates are smaller than unpenalized OLS estimates would be on the same data. 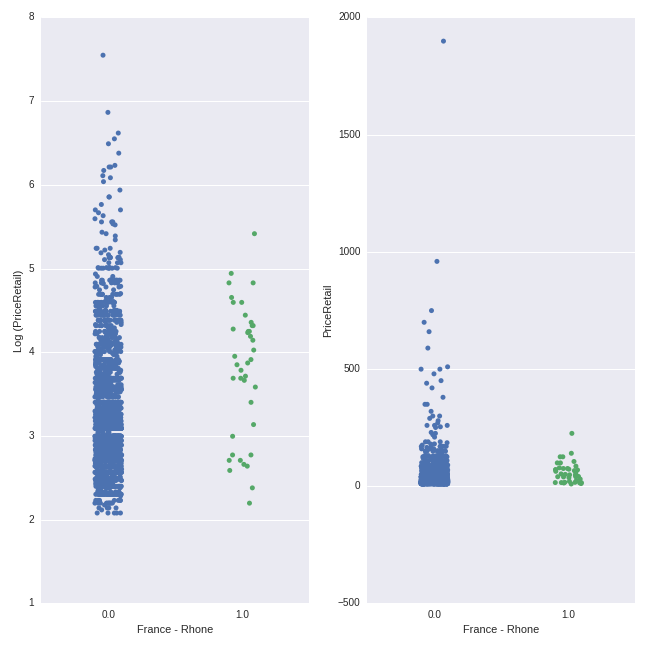 We can make the same plot for the Red Wines variable: 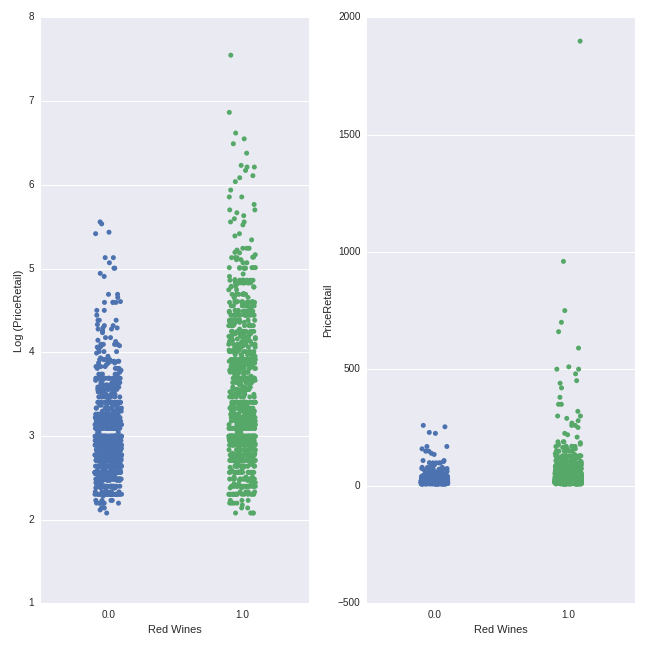 The pattern here is more clearly visible here than for the French-Rhone wines above. Red wines have a higher average price (mean = $52.74) than white wines ($24.13), though there is considerable overlap in the price ranges.

In these plots, we can easily see the effect of the log transformation of the price variable. Whereas the non-logged transformed price values are very “bunched together” with some extreme points (as we also saw in the heavy right-skew evident in the histogram above), the logged price variables are more “spread out” evenly across a smaller range. This conforms more closely to the type of distribution we seek in our target variable when modeling within a linear regression-type framework (the Lasso is a more exotic flavor of this overall family).

Let’s do a similar exercise for the quantitative predictor of year. Here we will make a scatterplot of the year of production versus the price, both on the logged and non-logged scales. 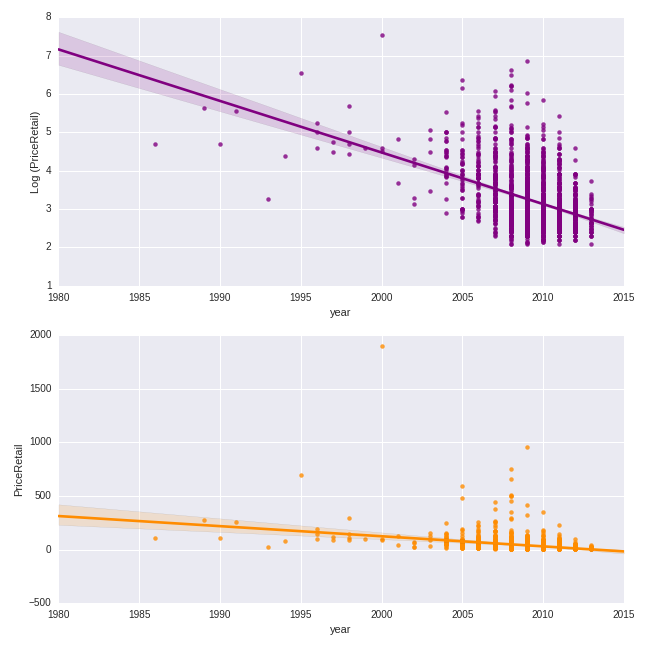 Finally, let’s examine the predictive performance of the model with the optimal lambda/alpha as determined by cross-validation model performance. The optimal model is returned by the LassoCV object by default. We here examine the root mean squared error (RMSE), or the average (square root of the squared) deviation between the model prediction and the actual value for each observation. We will examine the RMSE of the model in both the training and the test datasets.

The model yields a RMSE of .61 on the training and .67 on the test data, suggesting that the model slightly overfit to the training set. The RMSE values themselves are expressed in log units, as this is the scaling of the outcome in our modeling data.

One additional way of gaining insight into model performance is to plot the predicted price values from our model against the actual price values, both on the log and non-log scales. (The numpy function exp allows us to take the anti-log of both the predicted and actual logged price data, putting both variables on their original scale of US dollars.) 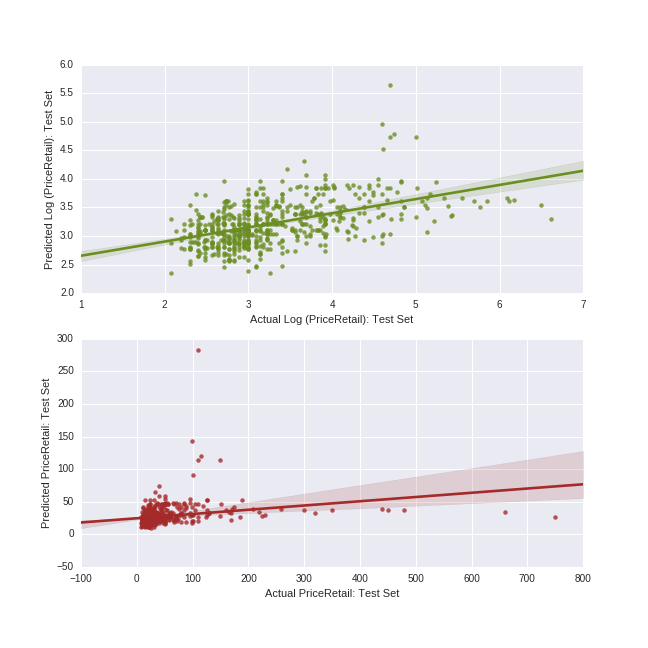 We can see that the model has a hard time predicting values at the higher end of the price range; these values are always predicted far lower than the actual values. In our handful of predictor variables, there is clearly nothing which differentiates these higher-priced wines from the other more moderately-priced ones in our main effects Lasso model.

There are many techniques for improving predictive performance. If we decide to stick with a relatively interpretable model, we could add additional predictors to the Lasso regression. We could alternatively create interaction or higher-order polynomial terms from any predictors we include in the Lasso. Or, if we are willing to give up some degree of model interpretability, we can use any number of “black-box” techniques (which often offer better predictive performance but whose predictive mechanisms are less opaque) from the machine learning family.

My next post will return to this dataset, using an ensemble machine learning method to perform a classification task. Stay tuned!