In this post, we will discuss the ideas and code behind a Twitter bot (called “Useless P-Values”) that I built recently. The bot simulates 2-condition experiments (with parameters similar to real-world scenarios in the social sciences) and posts a p-value of the between-group comparison to Twitter. Every 8 hours there’s a new simulation, comparison, and p-value.

There’s been lots of thinking in many areas of science (but particularly in the social sciences) about the lack of replicability of well-publisized research findings. See for example, this widely-publicized article which aims to estimate the reproducibility of psychological research.

There are many possible reasons that experimental social science findings tend not to replicate. This subject is not the focus of this blog post, but for an easily-readable introduction I recommend this excellent blog post by Andrew Gelman or this Wikipedia page on the replication crisis.

The Consumption of P-Values

In this post, we’ll focus on the consumption of quantitative research. Both scientific and non-scientific audiences are confronted with a nearly impossible challenge when making sense of significance tests in published articles (or anywhere else one might happen to come upon them). Typically, published research articles focus on one or more hypothesis tests which compare an estimated parameter (e.g. the difference between group means, the size of a regression coefficient) against zero (the default null-hypothesis).

Conventionally, a p-value of less than .05 is taken as evidence against the null hypothesis (e.g. that the observed difference between groups is not equal to zero), and furthermore (despite the break in logic) as support in favor of the researcher’s alternative hypothesis.

Lots of error can creep into the computation of p-values in published research, from p-hacking (conducting many different statistical tests and only reporting those that yield statistically significant results) to straight-up data fabrication. However, even when the tests are conducted and reported properly, they are often hard to interpret.

The Useless P-Values Twitter Bot is a meta-commentary on three important issues surrounding the typical use of p-values in published research:

A Deep Dive into the Code

We will now go through the code, explaining how it all works.

(Many thanks to Felix Schönbrodt and Stella Bollmann, whose presentation was very helpful in writing the below code. Their simulation examples were written in R, but I used Python because it was easier to set up the Twitter bot using GCP.)

For this simulation, we will use the numpy library to simulate the data and the Scipy stats library to conduct the t-tests. Let’s first load the libraries.

Step 2: Set the Sample Size and the Effect Size

In our simulation, we compare two groups (which we can think of as experimental conditions), each with a sample size of 50 observations. The number of observations per group is constant for each simulation, at 50 observations each, and is set in the sample_size variable in the code below:

We then randomly select an effect size for the difference between the two groups. The effect size is taken from the uniform distribution, with a lower bound of zero and an upper bound of .5. In other words, the effect size for each simulation is equally likely to be any value in between 0 and .5. This seems like a fairly reasonable assumption for an experiment of an unknown phenomenon in the social sciences. We store the randomly generated effect size in a variable called effect_size in the code below:

Step 3: Generate 50 Observations for Each Group, Based on the Effect Size

Step 4: P-Values (Testing the Difference Between the Two Groups)

The Useless P-Values Twitter bot simulates what it’s like to consume social science research. Sample sizes are low, effect sizes are at best small-to-medium (but also sometimes zero!), and we are asked to interpret p-values from an under-powered null-hypothesis significance test. Under these conditions, it becomes extremely difficult to know what to do with conclusions based on such p-values. 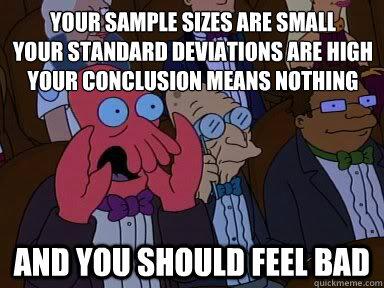 In the next post, we’ll move away from statistical inference and towards data visualization. Specifically, we’ll learn how to make word clouds that are fit for both data scientists and senior management.