In this post, we will once again return to the concept of convergent validity, and examine data from two fitness trackers to determine the extent to which their measurements agree. We will also examine the impact of the position of the tracker on the wrist, and see whether this makes a difference in the number of steps the devices record.

This post happened sort of by accident. I bought a Mi Band 5 in the summer of 2020, and had been quite happy with it - one of the things that’s great about using the Mi Band with Gadgetbridge is that it’s so easy to access the data. Unfortunately, the band got badly damaged at the beginning of December 2020 and so I ordered a replacement. I thought this would provide an interesting opportunity to test the convergent validity of both devices’ readings.

So, for 16 days in December of 2020 I wore both the old and the new bands simultaneously. Furthermore, as a small experiment, I switched the location of the devices every morning. Half of the time, the new (old) Mi Band was closer to (further from) the wrist, and vice versa. In the discussion that follows, I will refer to the position closest to the wrist as the “lower” position, and the position further from the wrist as the “upper” position. The picture below illustrates how I wore both fitness trackers, along with the positions. 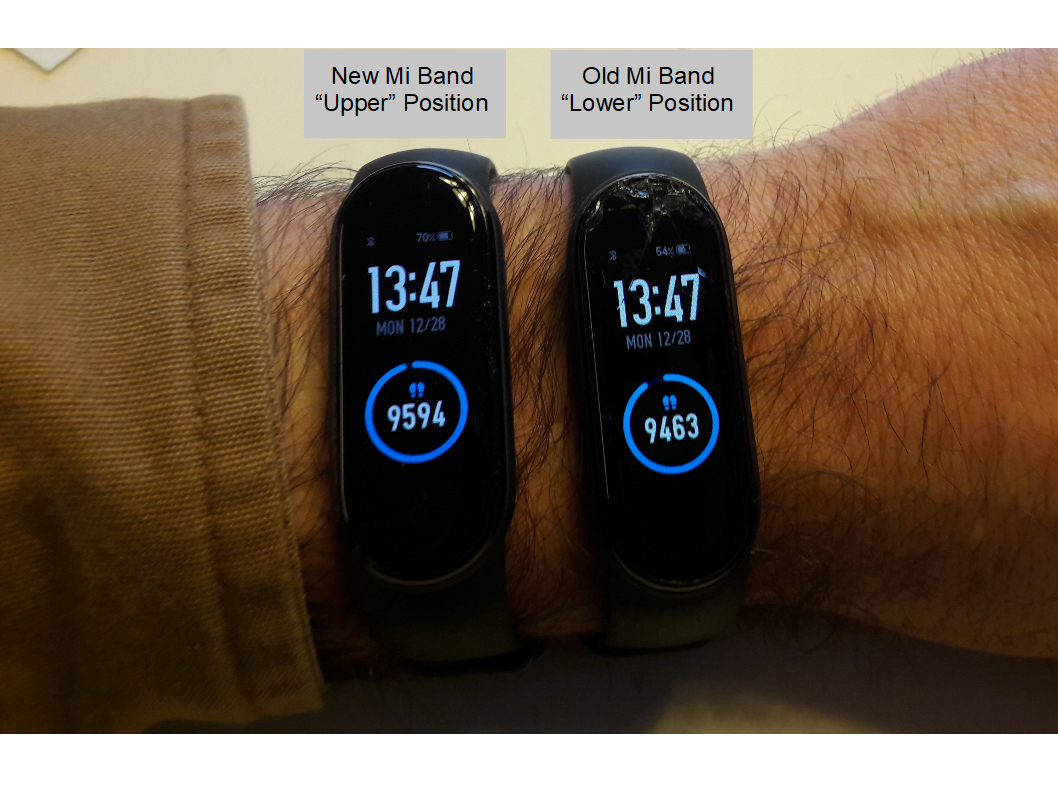 I extracted the data from both devices using the method outlined in a previous post, keeping a final level of granularity of day/hour, e.g. one line of data per each hour of the day from 6 AM to midnight (I’m not including measurements from the middle of the night because there’s basically no movement then). I merged the data from both devices and created a dummy variable indicating the position of the bands on my arm.

In total, the dataset contains information on from 16 days, with one observation per device from the hours of 6 AM to midnight on each day, for a total of 288 rows of data.

The head of the dataset (named merged_data) looks like this:

Let’s first make a scatterplot showing the correspondence between the measurements for the old and new Mi Bands, while also calculating the pairwise correlation between the values. We will make one plot for the hourly steps, and one for the cumulative steps.

On each plot, I draw a red dashed line as the identity line. If the measurements were exactly the same, all points should lie on this line. I’m also drawing regression lines separately for both tracker locations on my arm.

The colors in all the plots in this blog post are from the Economist palette in the excellent ggthemes package.

We can produce the hourly plot and calculate the correlation between the measurements with the following code: 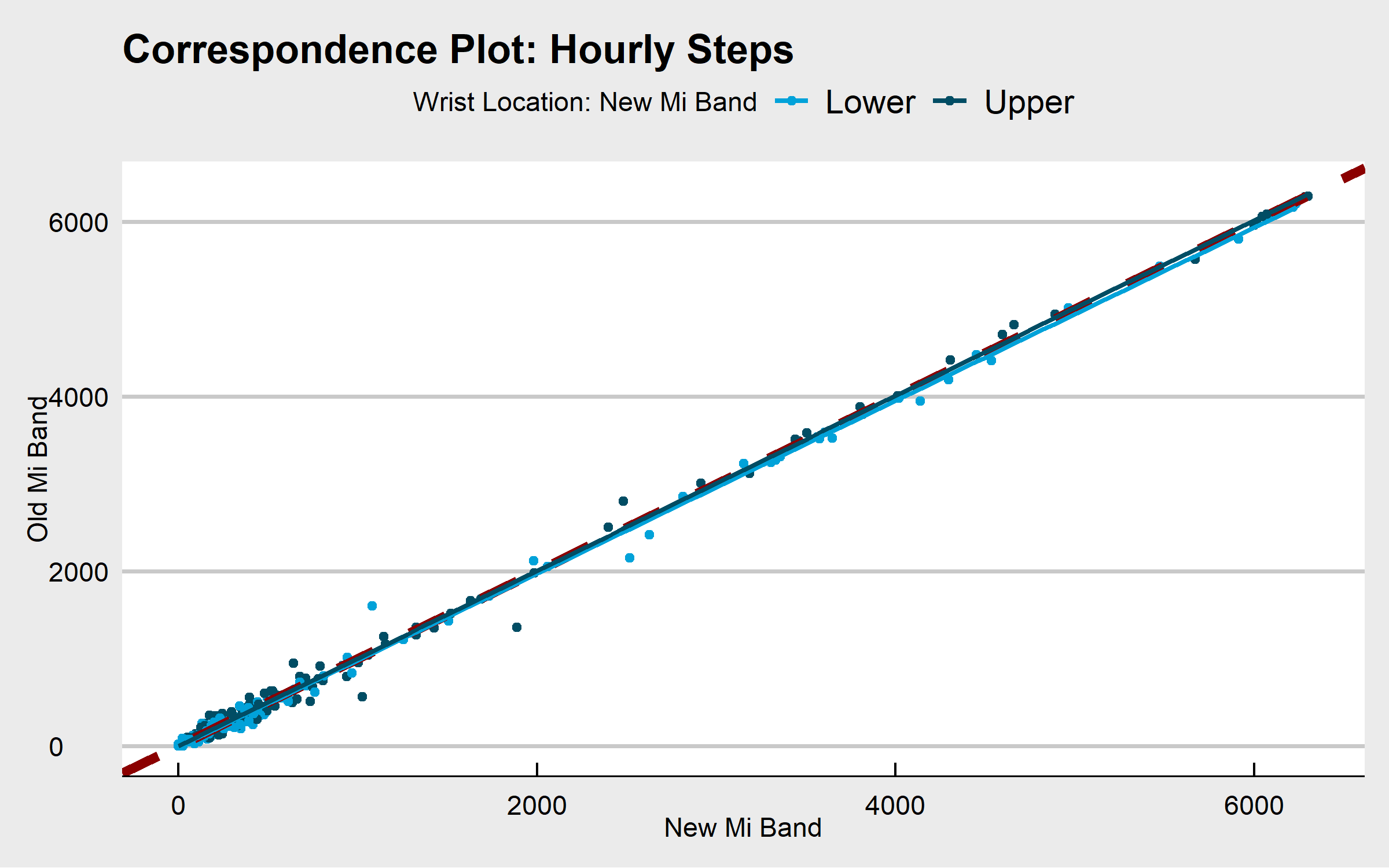 We can produce the cumulative step count plot and compute the correlation between the measurements with the following code: 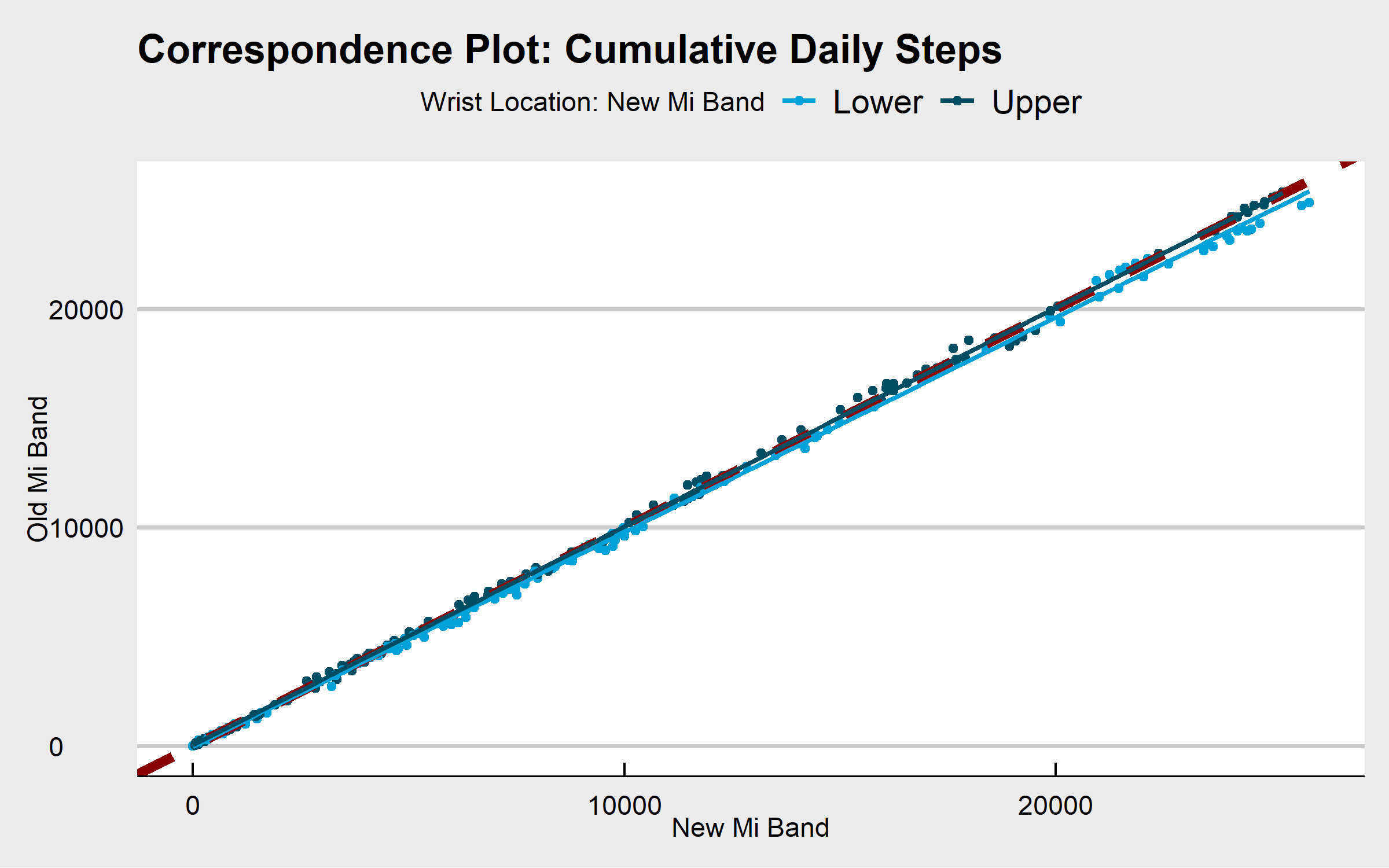 There is a small deviation in the correspondence of the measurements at the highest levels of cumulative step counts. Specifically, it looks like there’s a slight tendency for new Mi Band to register higher step counts when it is in the lower position (closer to the wrist).

We will use the excellent BlandAltmanLeh package in R to make the Bland-Altman plot. Note that it takes some additional work to get the plot to have the same color scheme as our above correspondence plots, with separate colors for device position. 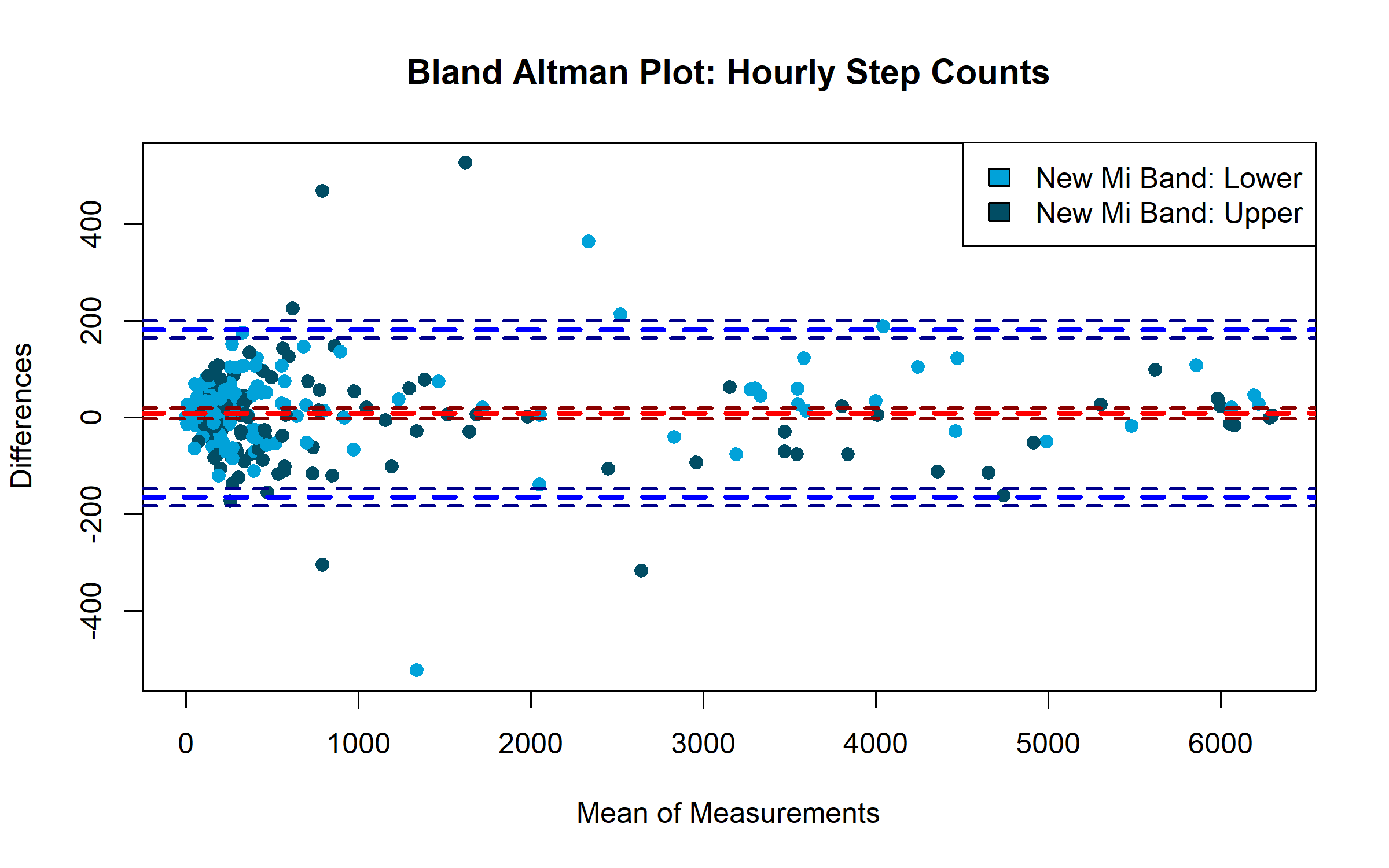 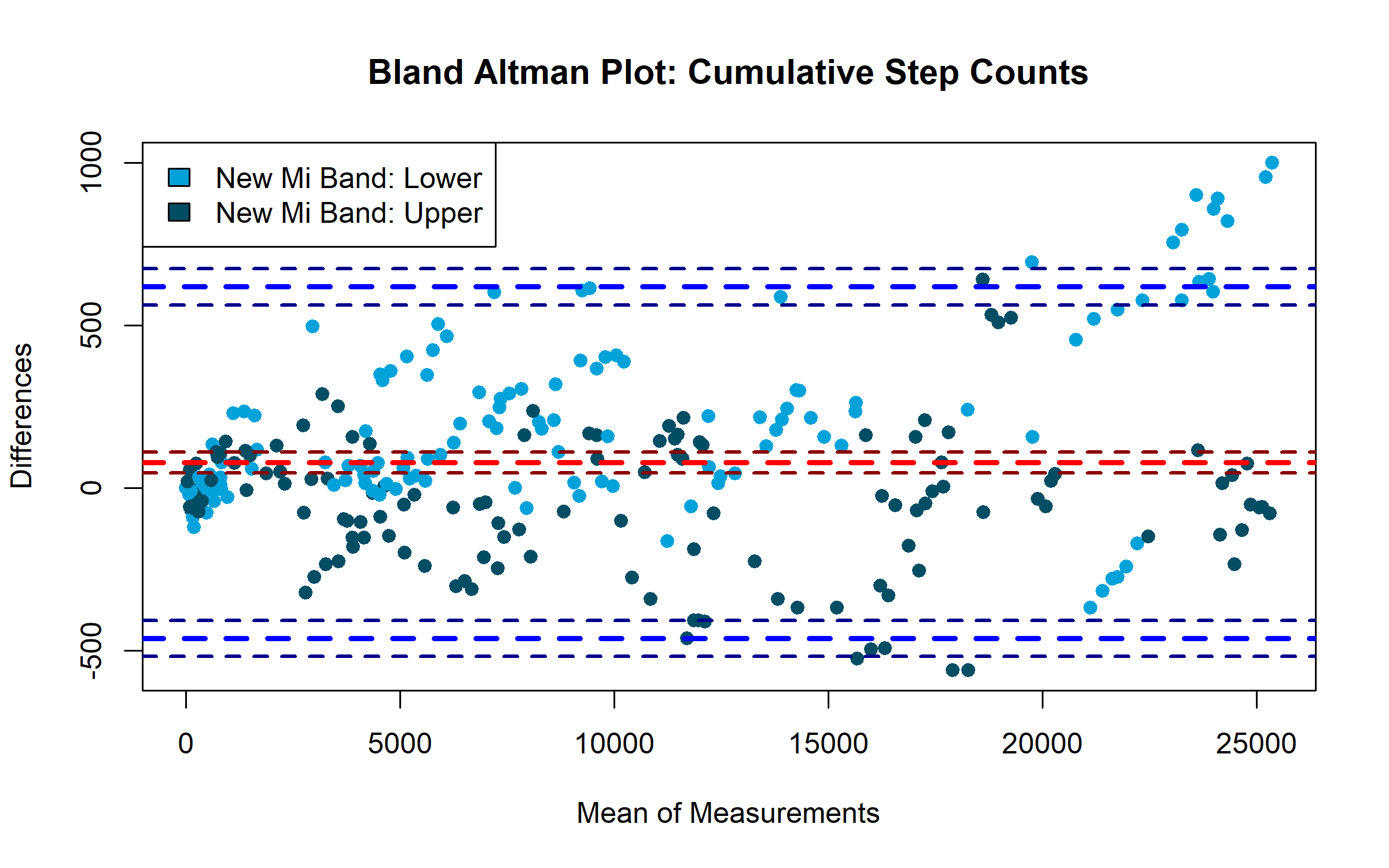 Differences Across the Day

Finally, we’ll take a look at the differences between the device readings across the course of the day. In the previous posts on convergent validity, I used the ggridges package to show the densities of the distribution of step differences. However, that technique works less well in the current case, where the number of observations at each hour is only equal to the number of days in our data, e.g. 16.

Therefore, we will use bar charts to examine the average differences between the device readings across the hours of the day. We will use separate panels to display the results for the different positions of the devices on my wrist.

We can make the plot for hourly steps like so: 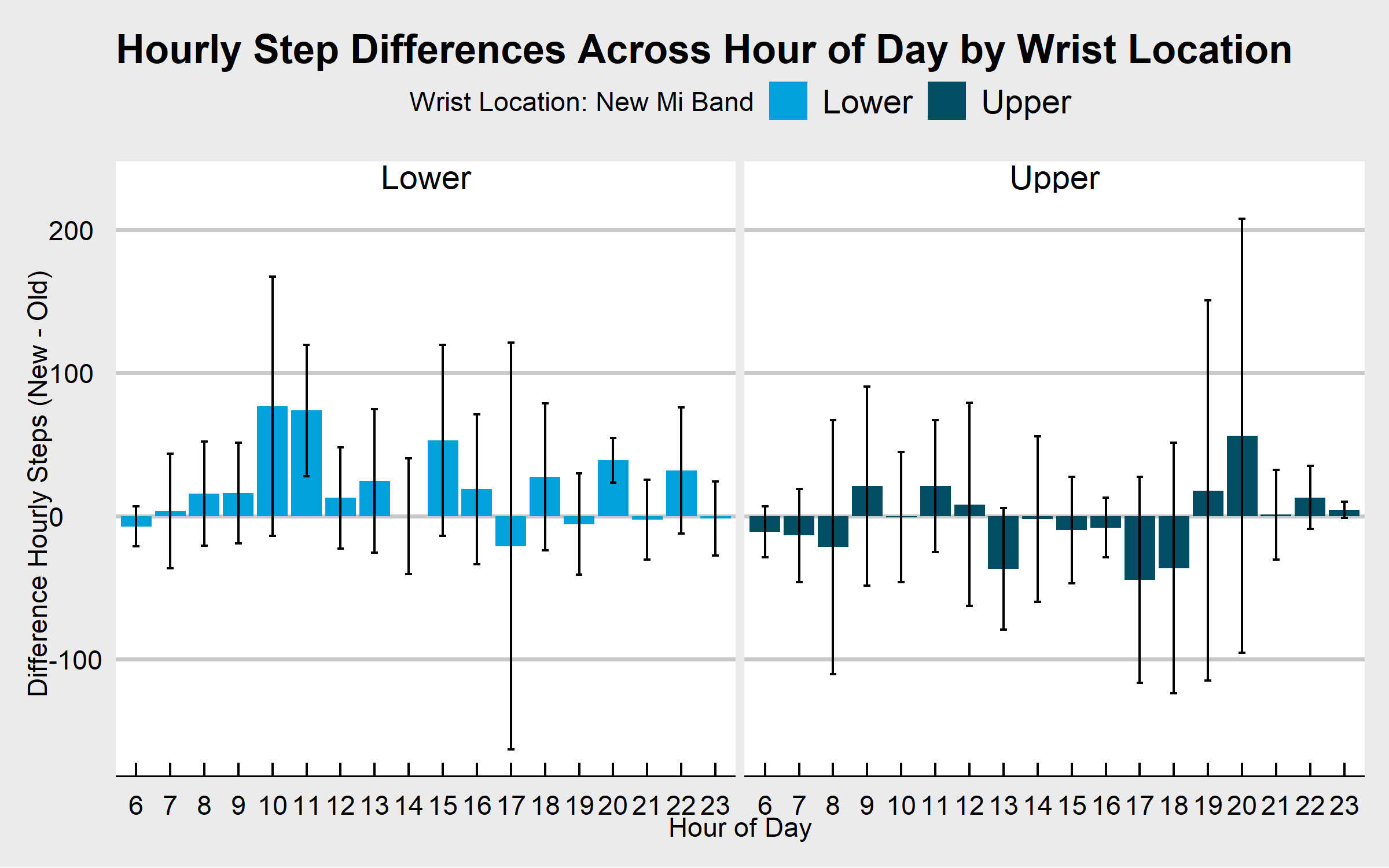 We can make the plot for cumulative steps like so: 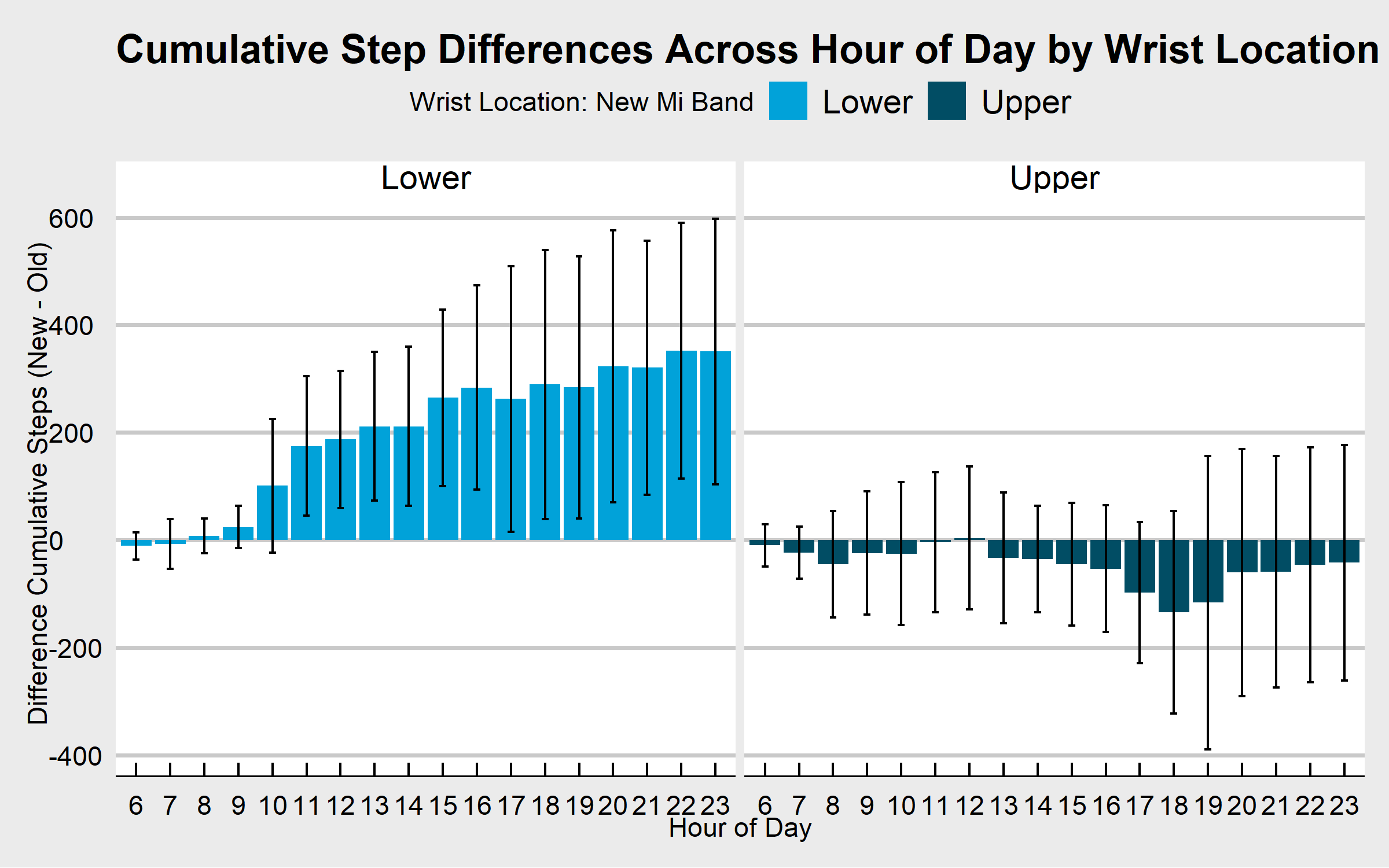 The plot looks quite different than the one for the hourly step counts! The directional pattern we saw on the left-hand side of the graph for the hourly steps is much more pronounced here. Specifically, from around 10 AM, when the new Mi Band is in the lower position, it counts slightly more steps than the old Mi Band every hour. Across the hours of the day, these small differences accumulate such that by the end of the day the new Mi Band has a step count of around 400 more steps than the old Mi Band. The 95% confidence intervals exclude zero from 11 AM onwards, indicating a systematic difference that is distinguishable from zero. However, the size of these differences is small (fewer than 400 steps by 11 PM, where the average step count at 11 PM exceeds 17,000, for a difference of around 2%).

In this post, we examined data from two Mi Band 5 fitness trackers, comparing the step counts between both devices across 16 days.

In comparison to my previous examinations of convergent validity among step count trackers, the convergence between both Mi Band devices was nearly perfect. Specifically, the scatterplot of the hourly and cumulative step count measurements indicated nearly perfect correspondence between the two, and the correlations for both sets of measurements was greater than .99.

However, the Bland Altman analysis suggested small directional differences between the devices, with the new Mi Band giving slightly higher readings than the old Mi Band. The analysis of the difference scores across the day revealed why. While both devices seemed to register more steps when they sat lower on my arm, this pattern was more systematic for the new Mi Band, resulting in slightly higher step counts for the new Mi Band across the days of data collection. However, in all cases the size of the differences was very small, never exceeding 2% of the total number of steps recorded.

In the next post, we will explore Bayesian regression analysis with the rstanarm package.