In this post, we will analyze government data from the Flemish region in Belgium on A) official crime statistics and B) self-reported feelings of safety among residents of Flanders. We will focus our analysis on two cities in the province of Flemish Brabant: Leuven and Vilvoorde. A key question of this analysis is: do the residents of the safer city (as measured by official government statistics) feel safer and have more pride in their city (according to government polling data)?

Our first set of data consists of official crime figures from the Flemish government, obtained at this website. I chose to download the data adjusted for population size. Specifically, the data record the number of reported incidents per 1000 residents. The types of crime reported are: property damage, theft, physical violence, and overall incidents. As of October 2018, these figures were available for the years 2000-2016.

Subjective Feelings About the Cities

The Flemish government regularly conducts a survey (called the “Stadsmonitor”) to monitor how the residents of Flanders feel about many different topics, including how people feel about the city or town where they live. Summary data are available by question on the official survey website. In this blog post, we will analyze answers from 2017 on the following questions: insecurity, problems, vandalism and pride in one’s city

I’m increasingly sharing data and code for blog posts in the hopes that this will be interesting or useful for readers. If you’d like to reproduce the analyses done here (or explore a different question), you can find the data and code at this link.

The code below reads the raw crime data file and first does some basic cleaning. These files were only available in an Excel format, and were not meant to be machine readable, so it takes some effort to manipulate the data to work with them in statistical analysis programs like R.

I then produce an additional set of crime statistics for Leuven. Because Leuven is a university city, there are a number of students who live here during the year, but who are not officially registered as residents of the city. Essentially, these “invisible” residents live in the city, potentially commit or are victims of crime, but are not counted as residents and so do not factor into the calculation of crime per 1000 residents. In my analysis below, I’m assuming that there are an additional 30% “invisible” residents, and therefore divide all of the crime figures by 1.3. I call these data “Leuven student assumptions” because they are adjustments to the actual figures, and not the official statistics themselves. The 30% figure comes from this article (in Dutch), in which the former mayor gives an estimate of the number of “invisible” student residents.1

I then convert the data from its original wide format to a long format, as ggplot2 requires data in the long format for plotting. The code to read the data, produce the adjustment for students, and transform the data is below:

The code produces a dataset ( crime_long ) that looks like this (only first 10 lines shown):

Note that we also have data on the entire Flemish region ( Vlaams Gewest ) which is a nice point of comparison - the global average across the territory. The descriptions are all in Dutch, but we’ll use English translations for plotting below.

The code below reads in the datasets (there is 1 dataset per question, and each dataset contains summary statistics from many different cities - here we focus on just Leuven and Vilvoorde). Unfortunately, there are slight differences in the formatting of the files between the questions, so I wrote a different function to read in every dataset. The functions read the data, select the observations from Leuven and Vilvoorde in 2017, and make English language column names (the original names are all in Dutch).

Our functions are all executed in a single line, and return a cleaned dataset for each of the four questions we will examine.

For illustrative purposes, the safety dataset is shown below. The answers are in response to the following question: How often do you feel unsafe in your neighborhood and city?

We will produce one graph for each outcome, and assemble the graphs into a single plot. For each outcome, we will plot four different lines, displaying the crime figures across the years for Leuven (“Leuven” in the plots below), Leuven with our assumptions about the student population (assuming 30% “invisible” student residents as described above, “Leuven Student Assumptions” in the plots below), Vilvoorde, and the Vlaams Gewest (average for the entire Flemish region).

The code below stores each single graph in an object, and uses the gridExtra package to plot them all in a single plot.

Which produces the following plot: 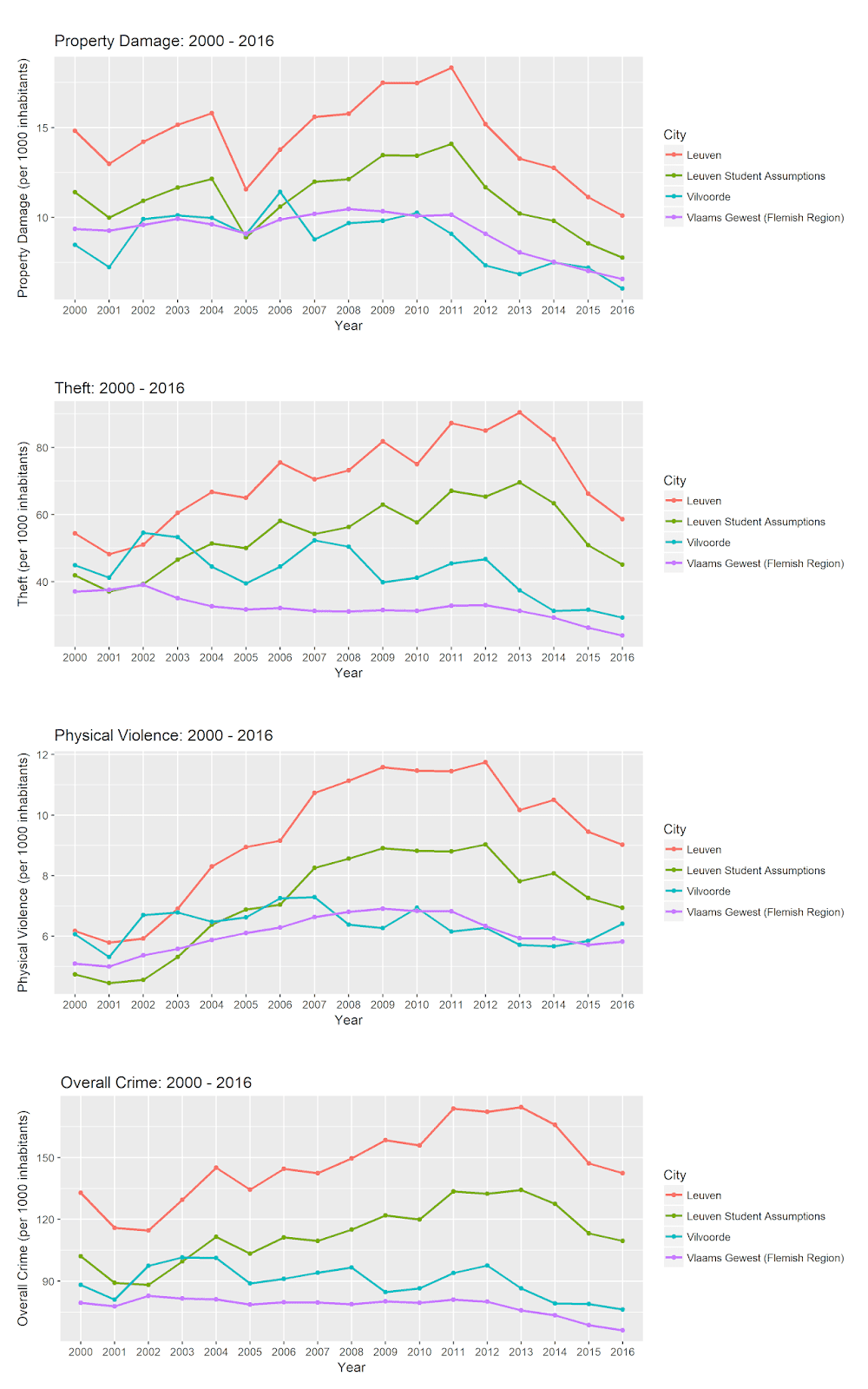 The official crime statistics for Leuven are higher than the other points of comparison for every outcome after 2003. Even with our assumptions about the “invisible” residents, Leuven consistently has higher crime rates than Vilvoorde and the Flemish region average. Vilvoorde sticks close to the Flemish average for property damage and physical violence, but is higher than average for theft and overall crime rates.

We will first take a look at subjective feelings of safety in one’s city and neighborhood. We will use the likert package to plot the responses to the questionnaires. The Likert package is great for producing stacked bar charts, a common visualization of responses to questionnaire data. The format of the data from the Stadsmonitor is also suited to this type of visual representation.

We first create a Likert scale object from the safety dataset we created above. Because the same question was asked in regard to both one’s neighborhood and one’s city, we will use a grouping in our plot. This will allow us to display the responses to both areas with a correct sub-heading for both neighborhood and city.

The code below creates the Likert object and produces the plot. 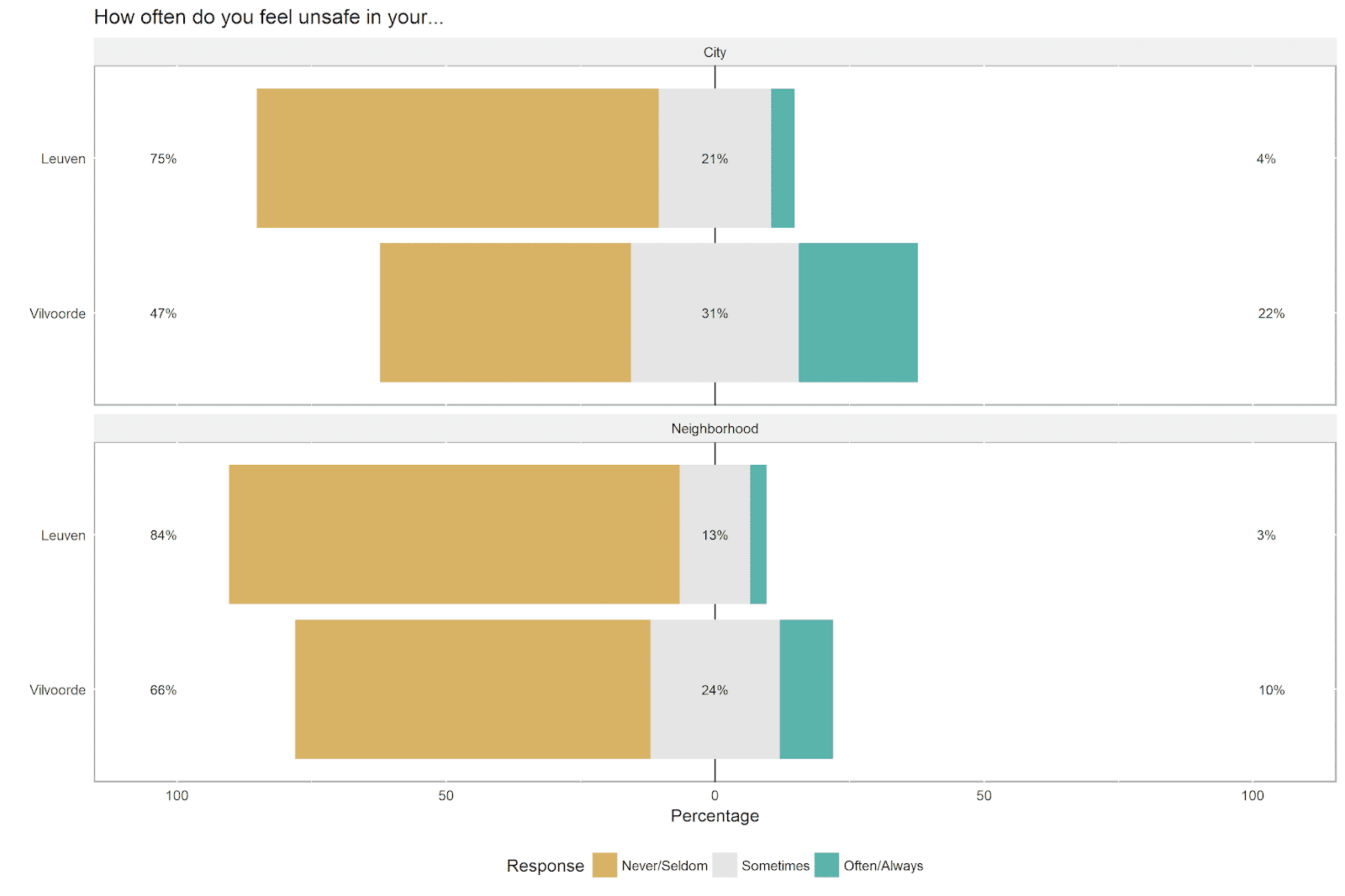 We will next examine questions about two social problems: being hassled on the street and seeing vandalism (literally “witnessing the destruction of street furniture” - public benches, lamp posts, etc.). We will also look at reports of feelings of pride in one’s city (an overall perception which is no doubt informed by feelings of safety).

We will display these three questions in a single plot, as we did above for the crime data. We first create a Likert graph object for each question (as the questions don’t have the same question structure and response options, it’s better to plot each one by itself). We then use the gridExtra package to display all of the graphs in a single plot.

The following code creates the Likert graph objects and displays them in one large plot. 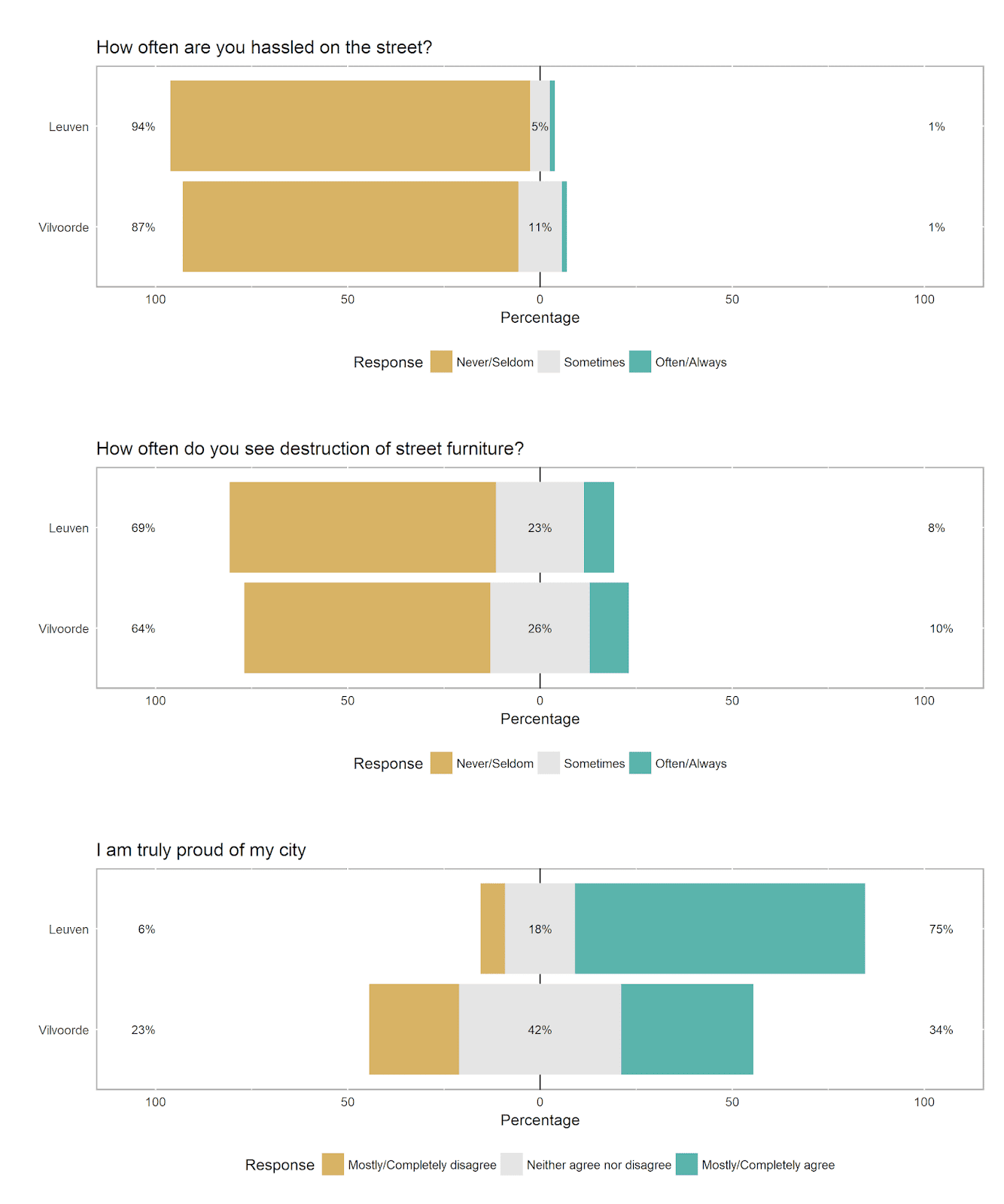 The self-report data are clear: residents of Leuven feel safer, report fewer social problems and are much more proud of their city when compared with residents of Vilvoorde.

On the one hand, Leuven (compared to Vilvoorde) has considerably higher rates of property damage, theft and physical violence, even when assuming that the official statistics are slightly biased because of “invisible” students who are not legally registered as city residents.

On the other hand, people in Leuven say that they feel much safer in their neighborhoods and in their city. Residents of Leuven also report seeing fewer social problems and are prouder of their city.

It’s interesting to see this disconnect between official crime statistics and self-reported feelings of safety. I will admit that I’m not entirely sure what to make of this. Potential explanations for this disconnect include:

My sense of these data is that, in some contexts, actual safety and feelings of safety are different things. The overall crime figures in Leuven are not very high, even though they are much higher than the average for the Flemish region (which is, after all, a relatively well-off part of the world). Given the relatively low crime rate overall, perhaps other factors influence how residents feel in the place where they live.

Leuven is a wealthy city in a wealthy province. My sense is that people have a common identity as Leuven residents ( Leuvenaars in Dutch) and are in many ways a homogeneous group (despite a sizeable number of foreign students and academics). Furthermore, the city is doing well economically and has a vision for itself (the university, science and technology spinoffs, along with a large bank and brewery company are all valuable sources of revenue for the city and its residents and seem likely to ensure a solid future in the modern economy).

Vilvoorde, by comparison, is much less wealthy. It is socially very diverse, with its residents coming from many different parts of the world. As such, it doesn’t have a single strong source of identity like Leuven, and its diverse residents do not always mix or know each other very well.

Given the different economic and social situations of these two cities, it is perhaps understandable that Leuven residents feel safer than Vilvoorde residents, even when the actual crime statistics suggest that the opposite is true.

In the next post, we will solve a basic programming puzzle that is (apparently) asked in data-science interviews. We will use this puzzle as a case study for understanding similarities and differences in programming logic and implementation of control structures in R vs. Python.